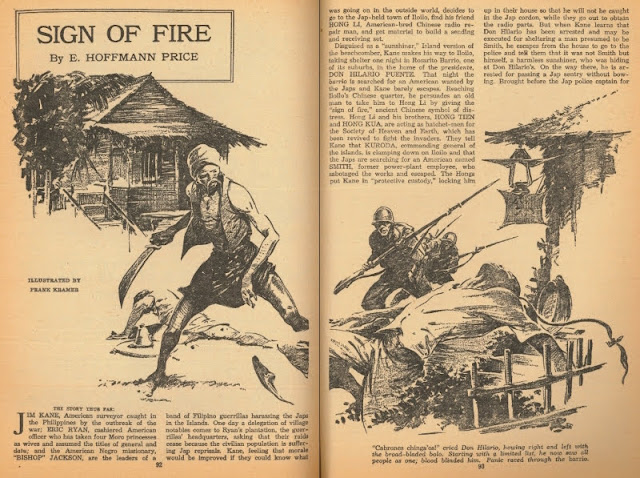 Over the last week I read my way through the May 1944 issue of Adventure. It was quite a bit of reading because the pages had that tight 63-line layout I described from a later issue of Fifteen Western Tales. It enabled the editor to brag that even though the new issue, at 146 pages, was 16 pages less than the previous issue, it actually had more content. I believe it. Unsurprisingly, a lot of the stories were set in the wartime present. For whatever reason, the wartime stories in this issue mostly dealt with the Pacific war. Also unsurprisingly, there's an inescapable propaganda aspect to those stories. The proof of real quality, especially in retrospect, is how well any author transcended the propaganda imperative.  Allan R. Bosworth's "The Steamboat Breed" is hopeless, mainly because of its silly gimmick, apparently popular at the time, that has ghosts of heroes past helping Americans fight the Japs. In this story it was Davy Crockett and his backwoods buddies helping out in the Aleutians. Worse still, in its own way, is Sidney Herschel Small's "The War Fan." This was a story in Small's Koropok series, in which American airman Llewelyn Davies carries out sabotage inside Japan in the guise of a light-skinned "Hairy" Ainu, a despised minority in that country. In the past, Small had often written sympathetically, if also stereotypically, of Japan and other Asian cultures, but on this evidence the Koropok stories give a vicious caricature of the Japanese that probably should have been forgotten after the war. By far the best story here dealing with the Japanese is the conclusion of E. Hoffman Price's two-parter "Sign of Fire." To be clear, I don't expect to see the Japanese treated as anything other than bad guys in wartime stories. But while Small's Japanese are doomed idiots, and Bosworth's are thankfully faceless, Price at least gives us a Japanese antagonist who seems like a human being, and for that seems like a genuinely dangerous antagonist. More importantly, while there's still an inescapable propaganda element to his series of stories about Jim Kane and his fellow American guerrillas in the Philippines, Price doesn't see that as a reason to compromise his style of storytelling or his feel for character.

By wartime standards, "Sign of Fire" is hard-boiled stuff and more introspective in allowing Kane to feel doubt and anxiety while interned with a group of "sunshiners," Americans who are basically on the bum and no threat to the Japanese. There's a harder edge to Price's writing that allows Kane to express contempt for the sunshiners and for the sunshiners to behave contemptibly. There's also a whiff of racism in Kane's resentment of American subservience toward the Japanese occupiers. Kane, infiltrating the sunshiners, is put to work with them on street-cleaning detail, sometimes having to pick up trash, from cigarette butts to animal droppings, by hand. "But the worst part of the whole nasty job was seeing, from the corner of the eye, that white women, halting as prescribed to bow to the skibbie [Japanese] guard, saw white men fumbling in the many weeks' accumulation of offal." To put this in a larger context, the guerrilla band in the Kane stories includes an American-educated Chinese who talks like a gangster and a black American, "Bishop" Jackson, who talks in something like the typical minstrel dialect but, judging from his brief appearance here, is a more assertive character than his sometimes deferential tone (addressing our hero as "Mr. Kane") suggests. So even with the bit I quoted my overall impression is that Price is a far less racist writer than Small, while Bosworth gets a pass because his Japs don't have speaking roles. In any event, this was war and hate is part of war. Interestingly, though, the most violent, horrific moment in Price's story, or this chapter of it, isn't perpetrated by the Japanese or the Americans. In a chapter titled "Juramentado!" he describes a suicidal murder rampage by Don Hilario, just released from Jap custody but unable to endure the humiliation. This man, "a Christian and the descendant of Christians, was going fundamentalist according to the Malay spirit," Price writes, and his principal targets aren't the Japanese occupiers but Filipino collaborators, those who have become "politically correct" in the World War II sense of the term. The Japanese soldiers react as anyone might react to such a scene, and while Price has Kane make a big deal of their alleged racial nearsightedness, he never makes that an excuse not to take them seriously. In a crucial scene in which Kane is interrogated by a Jap officer he's met before, Price scrupulously emphasizes the rational calculations the enemy makes and his inability to be fooled by Kane's sunshiner disguise. For the author, it seems to suffice that the man is the enemy; he doesn't need to be a monster or a clown as well. For now, then, Price sets the standard for wartime pulp writing, and the fact that some stuff on that subject from that period can be good gives me the confidence to try more.
Posted by Samuel Wilson at 7:22 PM