'I belong here, where life is rough -- like me,' he refused. 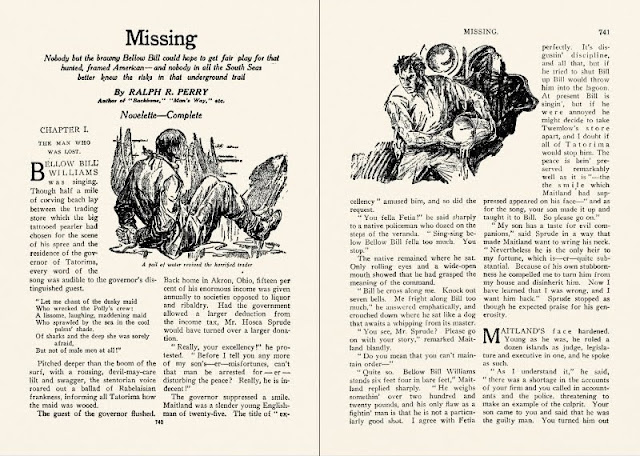 Ralph R. Perry's "Missing" (Argosy, August 1, 1931) is the earliest Bellow Bill Williams story I've read so far. The tattooed pearler was already a well-established character by this point; he's mentioned as a favorite character by some Argonotes letter-writers as early as 1930. Perry is careful to remind us right away that Bellow Bill isn't the superhuman sailor of the sort Albert Richard Wetjen and others wrote about; it's practically a defining characteristic of him that "he is not a particularly good shot." Otherwise, he's strong as a bull and blessed with the proverbial hollow leg. Bill's task this time is to recover the archetypal wayward son of a rigid American businessman. The old man is offering a big reward, but the boy, for a time Bellow Bill's protege, now stands accused of piracy and attempted murder. Bill's partly responsible for the heir's plight, for to get him away from the local police the pearler sent him to "the den of the worst scoundrels in the pacific," the leader of whom now claims never to have seen the young man known as Pug. But Pug can be identified as part of a pirate gang by a distinguishing scar seen by witnesses, so Bill will be hard pressed to clear his name.

Even though there's plenty of action, this is more a battle of wits than many of the later Bellow Bill stories I've read. On Thursday Island he has to negotiate with a cunning crook, the half-caste proprietor of the Hall of the Five Benevolent Virtues, who combines "the cunning and the ambition of a Dutch father .. with the savage passions of a Papuan mother." He has to convince this Mitaki that it'll be worth his while, in pearls, to deliver Pug back to his father without first killing Bill. Mitaki is counterscheming just as fast and figures out a way to frame Bill himself for another murder in the course of the negotiations. All through this, Perry goes to great pains to describe the layout, above and below, of Mitaki's place, where most of the action takes place. You practically could draw a blueprint from his description, the point of which is to emphasize the advantages Mitaki enjoys on his home turf, including such modest ones as his ability to evade violence on Bill's part simply by taking a few steps from his office into plain view of the bar patrons. However racist Perry's description of Mitaki may be, the story's success as a thriller depends on establishing the half-caste as a very intelligent, hence very dangerous antagonist -- though the author makes it just a little too easy for Bill to see through Mitaki's subterfuge thanks to a telltale bloodstain on his sleeve. Everything turns out all right, of course, and for some reason Perry closes the story on something like a note of pathos as Pug invites Bill to come to America with him and take a job in the family business, only to be rebuffed. Bellow Bill belongs in a rough and tumble world, no matter how qualified he might be for success elsewhere. "Fact is," the pearler confesses in Perry's last word, "I like it that way, even at the worst."
Posted by Samuel Wilson at 6:36 PM