'You might think you was a killer but you ... you didn't have the stuff' 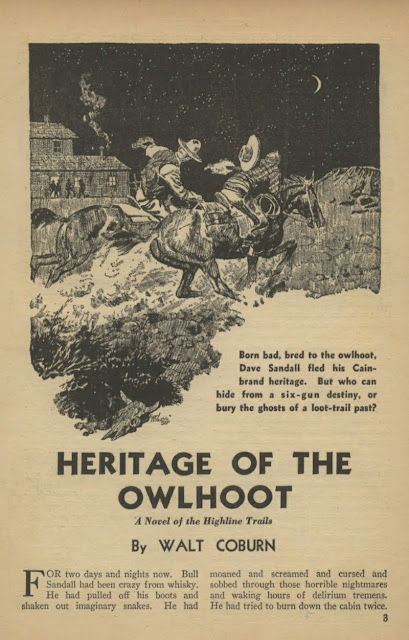 In "Heritage of the Owlhoot" (Action Stories, October 1939) Walt Coburn strives to get into the head of a young outlaw. The first part of the "complete novel" is a harrowing account of Dave Sandall's killing of an abusive, alcoholic father and his sentencing to a cruel reform school. Everything seems to go against the youth, from the booze-sozzled attorney assigned him by an indifferent court to a bungled escape that leaves him in the wilderness with a broken leg. His fortunes turn, though not necessarily in the right direction, when he befriends another delinquent, Hutch, after earning his respect by beating him senseless with a crutch. They team up to escape, Hutch killing a sadistic guard in the process, and turn owlhoot to survive. Tension develops early as Dave stops Hutch from killing a cowboy who gives them shelter in a line camp shack. Dave may have killed his own father, but that was a "him or me" moment; as a rule he doesn't believe in killing harmless or defenseless men. Hutch has a "take no chances" mentality when it comes to potential snitches, and in general he has more of a mean streak than Dave, if not a compulsion to provoke life-or-death fights. From that point, Dave has a hunch that Hutch will try to kill him someday, if only because, so he intuits, Hutch is afraid of him. For all that, Hutch remains a loyal partner on the owlhoot trail. Given an opportunity to abandon Dave to the mercies of a theoretical posse, Hutch chooses to stick with him overnight. He has what Coburn calls a "queer code," by which he means (I think) nothing subtextual but something paradoxical if not unfathomable. He may well want to kill Dave someday, or it may be inevitable that something would provoke him into trying, but that doesn't contradict an equally compelling loyalty -- maybe solidarity might be a better word -- he feels toward his comrade in escape and banditry.

The pair finally end up with some version of a "Hole in the Wall" gang where Hutch exposes some fundamental weakness of character through his desperate efforts to impress veteran outlaws with his bragging, while Dave simply sits aloof. The plot takes a sadly melodramatic turn here when one of the outlaws reveals that Dave had not committed parricide after all. The drunken bum who raised him wasn't Dave's father at all, it turns out. His real father, long dead, was a rancher who bequeathed Dave his ranch. The outlaw arranges for Dave to leave and claim his heritage, but not before Dave saves Hutch from a sudden attacker bent on revenge for something -- it's actually a nice touch that Coburn doesn't fill in the backstory, though we can conclude that he was the man who left horses outside the reform school for Hutch and Dave's escape -- by shooting him in the hand. That itself may sound corny but Coburn actually treats this in a more realistic way than the movies or funnies, since the next time we see this man, he's minus the hand. By that time he also has Hutch as an ally, as several years later they visit Dave's ranch to shake him down for money. That tells us something about the sort of co-dependence Coburn perceives among the outlaw kind; they may hate each other but sometimes they have no one but each other to stick with.

The stage is set for a final showdown in which Hutch will likely have the advantage because of his preternatural ability to see in the dark. Fortunately, Hutch is backlit when the final showdown comes, but even then Dave takes a bullet to put one in Hutch. Dave will live but Hutch will not. His final words are "no ... hard ... feelin's." An interesting sentiment at the end for someone shown as such a hater, and maybe a suggestion that on some level (he also says "Pick up the marbles") none of it was ever more than a grim game for him. For Dave's part, "Somehow, he had never been able to hate Hutch." Instead, he weeps at his sometimes friend's passing. His old friend and his new friend, the line shack cowboy who's heir to a ranch of his own, agree that, despite all we've seen, Dave "never was a killer." To be a killer is something different from killing, it seems, but Hutch's sudden loss of rancor at the end of his life may make you wonder how much of a killer he really was. Coburn's story is suggestive rather than incisive, maybe raising more questions than it can answer, but it's certainly a more sympathetic attempt to understand the outlaw than I was expecting from a 1939 story. Despite its corny turns, I appreciate it for that.
Posted by Samuel Wilson at 6:23 PM