'Look at their skins and ye can see who their father is.' 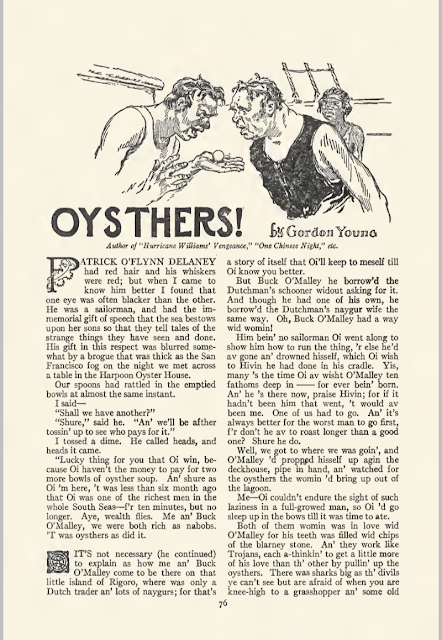 The four-page short story "Oysthers!" (Adventure, September 30, 1923) makes a better case for Gordon Young as a pioneer of the hard-boiled style, or at least the hard-boiled manner, than any of his longer works that I've read to date. It's an absolutely amoral tale told by a deliberately unreliable narrator, Patrick O'Flynn Delaney -- a sailor with "a brogue that was as thick as the San Francisco fog." In oldschool style Young introduces us to Delaney through the eyes of another first-person narrator, who meets the sailor in an oyster house where Delaney has spent his last dime on a bowl of soup. Once, however, "t'was less than six month ago that Oi was one of the richest men in the whole South Seas -- f'r ten minutes, but no longer." The rest of the story relates the rise and fall of Delaney and his fellow castaway on the isle of Rigoro, Buck O'Malley. Buck has "a way wid womin," having stolen a Dutch trader's "naygur wife" along with his schooner before picking up another woman on the island. Delaney practices abstinence, since "naygur womin [are] too [expletive deleted by editor A. S. Hoffman] handy wid knives an' ugly in other ways," but O'Malley enjoys having the women vie to service him in every way imaginable. To make a short story shorter, One of the women finds an oyster with a pearl inside "wid the shape of a hen's egg an' as big." The end of paradise follows quickly as Kate, the Dutchman's wife, ends an argument with her rival, Betsy, by burying a knife in Betsy's breast. "That for you, pig-woman," she says in farewell. O'Malley approves and has Betsy thrown to the sharks. "It was Kate that I love best anyhow," he remarks. He loves her too well and not enough, however, entrusting her to hold the great pearl while he does the dirty work of dumping Betsy overboard, only to have Kate pull a knife on him. She's worried that he'll find a way home to cash in the pearl, abandoning her. Extracting his promise to stay with her on Rigoro, she throws the pearl into the sea.

O'Malley he stood there gaspin' for air; then wid a yell he jumps, an' the fist of him took her in the jaw an' she fell over the skylight and her laigs quivered like a frog's that's dying.
'Ye black dirt, into the water wid yez an' find that pearl -- Oi'll kill ye! Don't ye come up widout it!'


Finally Delaney intervenes to save Kate, only to get stabbed by her while he fights his former friend. Both white men go over the side, but our raconteur makes it back on board while the sharks -- or "maybe as Oi sometimes think, 't was the black Betsy girl" -- pull O'Malley under. There's nothing left for Delaney but to take Kate back to her trader and then make his furtive way back to America, where "Some day we'll have a real dinner, wid radishes an' beer, an then Oi'll tell ye a story worth two of this an' ivery bit as true!" Even with the brogue, I wouldn't mind hearing another one from Delaney, as long as he keeps it just as short.
Posted by Samuel Wilson at 4:56 PM