'Then and there a savagery crept into his puppy-like nature.' 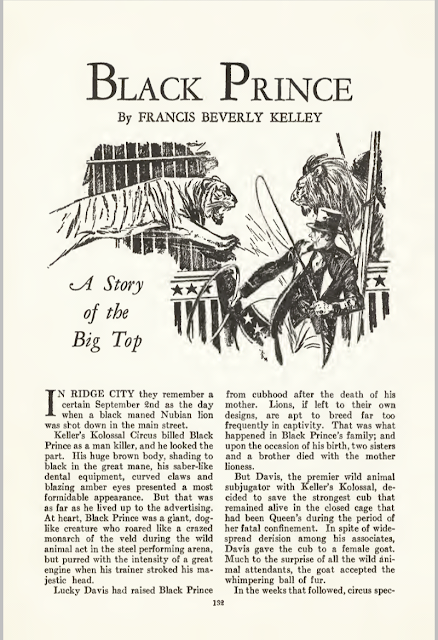 Francis Beverly Kelley was too busy in his full-time career as a publicist for the Ringling Bros. circus to be a prolific contributor to pulp magazines. His pulp career consists of two short stories and two nonfiction pieces published in Adventure between August 1931 and May 1933. "Black Prince" (April 15, 1932), the first of the stories, recounts the tragic career of a trained lion driven by very human emotions. The only survivor of a litter, the instantly orphaned cub is raised by lion tamer Lucky Davis of Keller's Kolossal Circus, who makes a she-goat the baby's wet nurse. The unlikely bond between the two animals persists after Black Prince is weaned, but is abruptly broken when some fool puts the goat in the wrong lion's cage. Black Prince watches a lioness kill his surrogate mother and goes mad with grief. Worse, he nurses a grudge until the opportunity comes to exact revenge on the lioness. His rage spent, the lion once more becomes a tractable animal, despite his inaccurate new reputation as a "man-killer." Kelley describes the training process for various lion acts in presumably authentic detail that makes his story worth reading, but then comes the next crisis for our poor lion. He grows jealous and irritable as Lucky starts training Sheba, a Bengal tigress who "showed rare promise as an actress." Re-reading the sentence, "How should Davis know that he fairly reeked of the hated tigress whom he had been petting previous to his visits to Black Prince's cage?" it occurred to me that, in Twenties slang, Kelley could just as well have been describing Lucky's makeout session with the circus vamp. For that matter, "Sheba" was the female counterpart of a "Sheik" in those roaring days. Ironically, the humbled Black Prince, relegated to an exhibition cage after a dangerous tantrum, ends up rescuing Lucky when the tigress freaks out after a botched spot in her act and the tamer actually calls for his old pet's help. Black Prince may have a "limited brain," but though outmatched by the tigress as a fighter, he knows he can distract her long enough for Lucky to make his escape. Making his own, he takes a wrong turn and ends up in the streets of Ridge City, where he is slowly slaughtered by a posse panicked by the prospect of a "man-killer" in their midst. Every year afterward, Kelley closes, Lucky makes a memorial pilgrimage to the hill in the city where Black Prince is buried. The final scene shows the aging lion tamer at his old friend's grave as the circus band plays "Auld Lang Syne" in the distance. It all reads sort of like a Tod Browning circus movie, though I'm not sure whether Lon Chaney would play the tamer or the lion.

Interestingly, in this issue's "Camp-Fire" section, where he makes his customary but belated introduction of himself to readers, Kelley confides that the cat-tamer he idolized as a youth was a woman, Mabel Stark, who in her day was just about the most famous female circus performer. I suppose, however, that his odd little story of animal jealousy would be odder still with a woman protagonist. Writing of the real life behind his story, he observes that "In the fascinating school of the steel arenas [the big cats] parallel a classroom where both intelligent pupils and those of retarded mental growth are found. There are model students and there are morons in the big training cages." He also defends circus people against a "rough and uncultured" stereotype. "With its citizenry of many nationalities and numerous religions, the circus is a great place to learn tolerance," Kelley notes, "All of which probably can be summed up like this: 'Never turn up your nose at anyone; remember the law of gravity.'"
Posted by Samuel Wilson at 3:39 PM