'Mohammedans interest me. Supermen of the East. Excitable, you know; rather fanatical.' 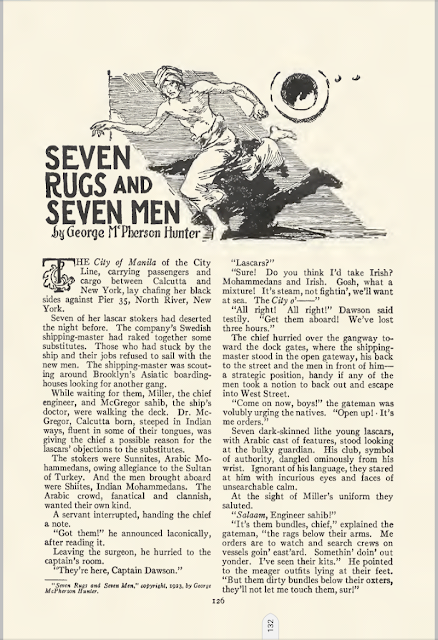 During the 1910s, Presbyterian minister George McPherson Hunter was secretary of the American Seamans' Friends Society and editor of its magazine, The Sailors' Magazine. He started writing fiction for the pulps in 1919, in his fifties, and made it into Adventure only once. "Seven Rugs and Seven Men" (September 30, 1923) resumes the adventures of McGregor Sahib, a character Hunter created for The Green Book. Here, McGregor is ship's doctor for the City of Manila, currently docked in New York. The author's knowledge of the sailor community in the metropolis adds some color here as the ship has to recruit not merely new crewmen but new lascars, Asiatic seamen, from "Brooklyn's Asiatic boardinghouses." McGregor, "steeped in Indian ways," sees that the wrong men may have been hired.

The stokers were Sunnites, Arabic Mohammedans, owing allegiance to the Sultan of Turkey. And the men brought aboard were Shiites, Indian Mohammedans. The Arabic crowd, fanatical and clannish, wanted their own kind.


Sunnis and Shiites at odds? That sounds right, even if they're not as neatly divided geographically as Hunter seems to think. Still, McGregor is a veritable scholar of Islam compared to Chief Engineer Miller, who's astonished to find that the Muslims own prayer rugs. "Ain't they heathens?" he asks. Told about Muslims' five daily prayers, he remarks, "If them poor black guys can't pray without rugs below their knee-bones it's not me that'll be hindering them."

The City of Manila sets sail at a moment of international tension caused by resurgent Islam. "Turkey's defeat and humiliation [in World War I] had shaken the Moslem world and stirred the leaders of the faithful into action. her sudden rally and stab back at Greece [in 1921] had given courage and hope to the Moslem hierarchy. Followers of Mohammed were being urged to preserve the faith of the Green Banner." Little do those followers know that Turkey, under Mustafa Kemal, will shortly stab them in the back by abolishing the Caliphate and embarking on a radical program of secularization and westernization, but where's the fun in that for a pulp writer? In any event, the British navy and British intelligence are ordered to keep an eye out for Muslims using the sea lanes to spread seditious literature. The stakes are high, since "They man the merchant ships of the East. A holy war could be waged on sea and land." So says Ames, a scholar of Islam whose movements begin to arouse suspicion. Personally, I began to suspect that Ames was some sort of Bolshevist, but that idea went overboard when Ames is found dying, apparently captured and tortured by some of the lascars. He turns out to have been an intelligence officer like McGregor, who breaks the case with one of those weird tests that "appeal to the pageant sense of the Oriental" and the pulp writer.

In this trick, McGregor gathers the lascars together and sets them to the task of licking envelopes. The ones who fail are guilty of killing Ames and concealing the jihadist literature inside their carpets. "The strain of smothering all [their] fears was considerable and affected them physically, parched their tongues, dried up the saliva in their mouths," McGregor explains, "They hadn't enough moisture to wet the mucilage on the stamps. They betrayed themselves!" I might have expected editor Arthur Sullivant Hoffman to ask the author, "Was it the stamps or the envelopes they were supposed to lick?" but perhaps the great man had made up his mind to indulge Hunter by publishing his tale before reaching the end. Hunter missed his one-and-only chance to contribute to "The Camp-Fire," and quit pulp for several years to edit the Pittsburgh Presbyterian Banner before placing a run of stories in the Clayton magazines. His last pulp fiction appeared in Short Stories in 1938. He retired from the ministry at age 90 and died three years later, in 1961. If only today's seditious plots could be discovered as easily as Hunter imagined.
Posted by Samuel Wilson at 4:09 PM