'The Retreat of the Cowardly Gringos' 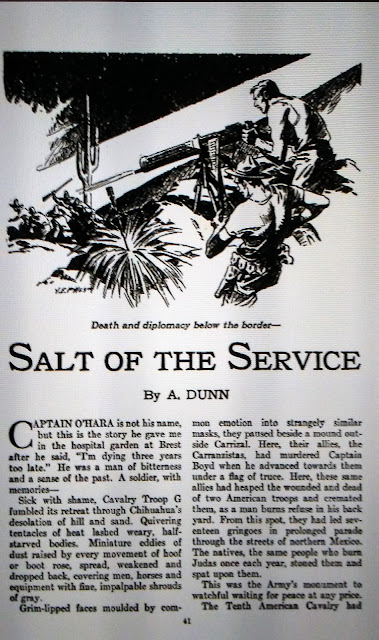 The 1916 American punitive expedition into Mexico was the Vietnam experience before Vietnam, or at least a preview of it. That's the impression you get from "Salt of the Service" (Adventure, July 1934), credited in print to "A. Dunn" but credited to veteran pulpsmith J. Allen Dunn in the FictionMags Index. Narrated by a soldier dying in France, "Salt" follows Troop G of the Tenth Cavalry on its way out of Mexico, not long after a massacre of U.S. troops by forces loyal to the Mexican president, Venustiano Carranza. American troops entered Mexico in pursuit of Carranza's ally-turned-enemy, Pancho Villa, who had raided a New Mexico town and killed both soldiers and civilians. If Villa's capture or death was the object, the mission was an abject failure, and Dunn describes the pointlessness of it in language that would be familiar to readers forty or fifty years later: "Now they knew that all they had accomplished was to change Mexico's fear into contempt." The troops see signs reading, "The Retreat of the Cowardly Gringos." As with Vietnam, the failure of the Mexican expedition is blamed on American politicians who would not let American soldiers go all out to win. Dunn seems to still carry a grudge against Woodrow Wilson, the president at that time, describing the humiliation of American forces as "the Army's monument to watchful waiting for peace at any price." "Watchful waiting" was Wilson's description of his policy toward both the Mexican unrest and the war that had broken out in Europe in 1914. In both cases, many American critics felt Wilson should have done something more substantial long before he actually did.

The story describes Troop G's encounters with two Mexican officers, the contemptible and treacherous Colonel Pardo and the honorable Captain Garcia. The latter is a Yaqui indian who instantly befriends the company doctor, Captain Edwards, because Edwards' father had been a friend to the Yaquis back when an older Mexican regime was trying to enslave them. In a reversal of the expected formula, the native is the one with "intelligent" eyes and a clean uniform, while the Mexican, Pardo, is "a cognac-bellied, crane-legged half breed" with "pigs' eyes and nose" and a "swine's mouth." Pardo wants to kick the Americans out of his territory as quickly as possible while Garcia, fearlessly defiant if not contemptuous toward his commander, prefers to permit them an honorable withdrawal. Unbeknownst to Garcia, Pardo sends men after dark to murder as many sleeping Americans as possible. They get four before the Americans capture two. The crisis comes when Pardo demands that these two be turned over to him, while the Americans insist on trying them for murder and dealing with them as the verdict dictates. Garcia quickly realizes what's happened and is surprised that the Americans don't simply rout Pardo's men.

"I cannot understand why you do not fight, you and your Army. I see you are brave. I see you wish to avenge your wrongs."
O'Hara said, "We swear loyalty and allegiance to our President -- not to the man but to the office. If we did not obey because we did not like or understand our orders, we would be like Mexico. We would have anarchy and suffering. We cannot break our oaths."
The Yaqui thought. "I am very sorry for you," he told him sincerely.


The lingering resentment of Wilson's policy is unmistakable. As it turns out, Pardo tricks the U.S. government into ordering the troop to turn over the killers, but Garcia detects the trick and resolves the situation by dragging Prado to the American camp and forcing him at machete-point to execute his killers himself. This "saved the spirits of this company," Captain Edwards tells the noble Yaqui. The tale closes on a cynical, foreboding  historical note: "At dawn, Troop G fumbled its way home through Chihuahua's desolation of hill and sand, leaving death behind. In another week it would read of German atrocities in poor defenseless Belgium." Dunn doesn't return to the dying soldier whose reminiscence gave his story its framing device, but that last mention of Europe effectively tells us how that poor man's fate was sealed.
Posted by Samuel Wilson at 5:43 PM