'You're a shrewd woman, Astarte. You know that I love you?' 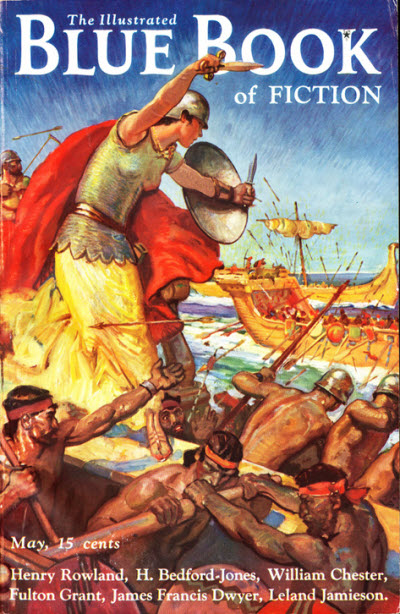 Whether of not H. Bedford-Jones was king of the pulps, the superprolific author  pretty much was king of Blue Book until his death in 1949. For the McCall monthly he specialized in series based on some historic theme, published under his own name, or that of his favorite pseudonym Gordon Keyne, or sharing credit with his imaginary friend Captain L. B. Williams. While Bedford-Jones could write in the more direct modern pulp style, immersing the reader immediately into his story, his series stories for Blue Book (he did some for Short Stories as well) revert to an older indirect style in which the narrator encounters some interesting person who then tells or shows the story. This framing device gimmickry was taken to an absurd level in the "Famous Escapes" series (credited to Keyne) in which tales from history are told by a deaf-mute convict -- in sign language translated by the author. The actual stories usually are pretty entertaining as Bedford-Jones ranges across history from ancient to modern times in search of material. "Astarte Sails to War" (the May 1937 cover story) is part of the "Ships and Men" series credited to Bedford-Jones and Williams, whose captaincy presumably gave these stories a whiff of nautical authority. This particular story offers a secret origin for the Phoenician goddess Astarte in the form of a Hollywood screenplay.

In the framing story, the narrator literally bumps into a studio set designer -- with his car -- and takes the luckily uninjured man to the workshop where he's designing ships for Colossal Pictures' epic Astarte movie. Fascinated by the period detail, the narrator accepts an invitation to read the Astarte screenplay. The main story is the narrator's paraphrase of the script. "If you have witnessed that remarkable picture, which I believe was released sometime since, you'll remember the scene," is the segue. The screenplay is premised on the idea that the Phoenician gods were once mortal heroes and heroines. The god Melkarth originally was their prophet as they sailed from Assyria in search of a new home, and his daughter Astarte, later worshiped as a sometime war goddess who often adorned the prows of ships, is an innovative shipbuilder whose lighter vessels will run rings around a hostile Egyptian fleet.  Hollywood, of course, has to add a love triangle to this tale of female empowerment, as Astarte is coveted by Ithobal, her most ambitious captain, but falls for Hiram, her half-Greek assistant designer. Ithobal covets Astarte's power more than her love, really, but jealousy leads him to assassinate Hiram and attempt a coup d'etat which our heroine puts down in proper pulp fashion.

"You're doing, Ithobal!" she aid in slow, still voice. "This is a knife that my father gave you before we left Assyria. You dare not lie!"
"Neither dare nor would," and Ithobal stepped out boldly. "Aye, lady, I slew him. And now listen to me, Astarte! I am not alone --"
Had she let him speak his will, matters would have been different, for he was deep in guile and had a multitude of the host to back his purposes. But none of his friends were here among the captains in the tent.
Swift as light, Astarte caught a spear from the ground and flung it, and the spear smote Ithobal where neck and arm came together; and he lay dead. She lifted her arms to the stupefied captains.
"You, who took oath to me! Am I your leader or not?"


I especially like the lapse into archaic, almost biblical language, as Ithobal is killed. Bedford-Jones then tries to have it both ways in the epilogue. At the end of the story proper, Astarte gets word that Hiram isn't dead and might survive. The narrator notes that the original screenplay ends with Astarte rushing to Hiram's tent, and admires its ambiguity over whether Hiram will survive, only to note that the finished film had an unambiguous happy ending. Saying he's not dead yet in the first place seems like kind of a cop-out to me, but I suppose Bedford-Jones is trying to make a point about the different ways in which movies and pulp fiction might handle such a situation. It hardly matters, as if you like historical pulp you'll probably enjoy "Astarte Goes to War" without worrying over whether a 1937 Astarte picture would have hit or flopped.
Posted by Samuel Wilson at 3:34 PM