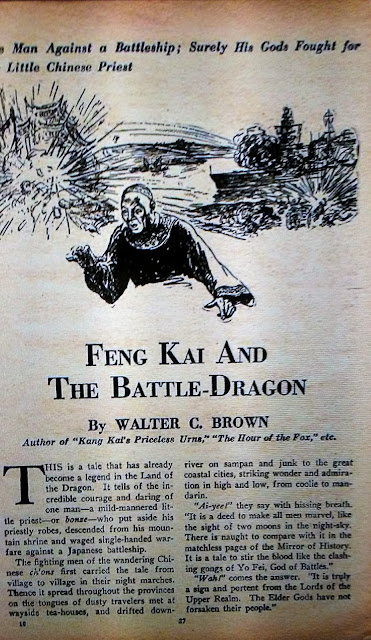 We use the term "Yellow Peril" to describe an indiscriminate fear of Asia, particularly China and Japan, that flourished for much of the 19th and 20th centuries, or to describe archetypal Asian supervillains like Fu Manchu. The color palette of peril turns out to be slightly more subtle than that -- at least when an author imagines Asians' perceptions of each other. Read enough pulp fiction from the World War II period, or immediately before, and you'll notice that the Japanese, especially when opposed by the Chinese, are "brown" at least as often as they're "yellow," however "yellow" they may have seemed, by another measure, after Pearl Harbor. In Walter C. Brown's "Feng Kai and the Battle Dragon," (Short Stories, April 10, 1940), the Chinese protagonists almost invariably refer to the Japanese invaders as "the Brown Men." The story itself belonged to a popular wartime subgenre in which some humble citizen of an invaded country pulls off an improbable coup against a technologically superior enemy. In this case, Feng Kai, "keeper of the Temple of Milo Fo on Dragon Mountain, which is near the village of Lung-chu," avenges his temple and village by singlehandedly sinking a Japanese battleship or "battle dragon," as the fantastical Chinese call the mighty vessel. Brown specialized in Chinese stories, whether set in China or Chinatown, though any claim of his to know the "Oriental mind" probably was as preposterous as the claims made by the white heroes of many such stories. Chinese tales really were fantasies of an alternate, more flamboyantly ruthless lifestyle that re-envisioned everything in purple prose and nonsense names that amounted to a kind of bardic word-jazz that presumably was at least as much fun for authors to write as it was for fans to read. You didn't read them for the laconic kick of the hard-boiled school, but for an opposite thrill of vocabulary. Here's how Feng Kai responds to a report of a one-sided battle.

"Ai-ee!" Feng Kai replied, "It is a tale of sorrowful hearing, but let us not despair. There were also terrible dragons inthe old days, laying waste the whole land with fiery breath before they were conquered and slain by our honorable ancestors. Shall it be said that the Sons of Han have lost their ancient courage?"
The Long Sword veteran laughed bitterly. "Master, how shall men of mere flesh and bone conquer these great iron devil-machines that scoff at blows, and cannot be made to bleed and die? Times  without number did we rush forward, but the Brown Devils fight with chatter-guns that stand on three little iron legs, spitting out death faster than a man can count. The sons of Han were cut down in rows, like blades of rice at the harvesting. The Lung-ho runs red with their blood."


So on and on as Feng Kai tries to negotiate with the occupying commander only to see his village shelled, his temple wrecked. The bonze swears vengeance on the "dragon" or "devil-boat" more than the men manning it and slowly heads for a fateful rendezvous, meeting various helpers along the way, including a barber whom he asks, "Tell me, Man of Razors, how may I enter Shan-tze?" Passing through a coal mine, he ends up with a sack of dynamite that he manages to load on board the battleship with unlikely ease -- and he gets away to build a new temple to Milo Fo in Brown's fairy-tale ending. Before Pearl Harbor there was sometimes a hint of ambivalence in pulp accounts of the Sino-Japanese conflict -- no one ever made the Japanese the good guys, as far as I know, but some portrayed both sides as equally ruthless, and I've read a Spider novel in which a Chinese villain uses the war effort as a pretext for taking over organized crime in New York City -- but there's no question here who the good guys and bad guys are. Brown is bad, yellow good.
Posted by Samuel Wilson at 1:45 PM