'What the hell do you think a man is?' 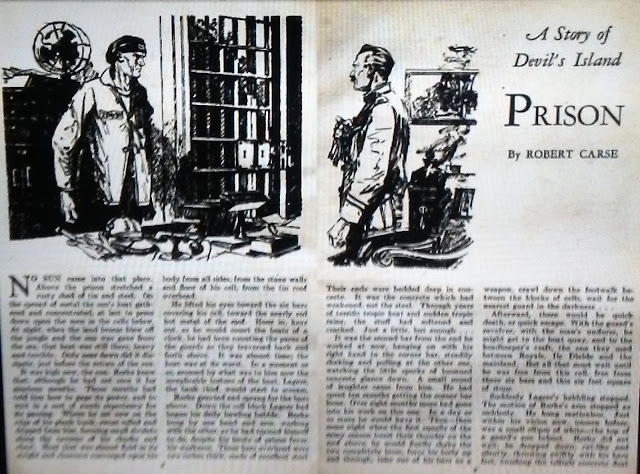 Stories of France's colonial empire allowed pulp writers to express more ambivalence about imperialism than adventures set in the British Empire. That's not to say that much pulp fiction was expressly anti-imperialist -- though one Foreign Legion specialist, J. D. Newsom, declared himself against in an Argosy autobiography. It's that tales of the French empire emphasize brutality and cruelty in a way English stories usually wouldn't, but it was usually cruelty and brutality as endured by Frenchmen or the mercenaries of all nations who filled the Foreign Legion. There's no British Empire equivalent of the Devil's Island subgenre, which is presumably to Britain's credit. If much of pulp fiction invited readers to vicariously test their courage, both Foreign Legion and Devil's Island stories posed this challenge: could you take it? For Depression readers especially, possibly, the hinted at how much worse things could get for a man. Robert Carse specialized in Devil's Island stories like "Prison" (Adventure, November 1, 1931) as well as Foreign Legion tales. The former could be summed up as the latter stripped of the last vestiges of romance and glory. "Prison's" protagonist is Rorke, an American Legionnaire and winner of the Croix de Guerre who ended up on Ile Diable, aka Ile Joseph, after killing his commanding officer, an archetypal military madman, to stop him from massacring his own men, both as a tactical blunderer and an outright murderer.

Only the influence of the U.S. ambassador got him imprisoned instead of executed, but prison proves a fate almost worse than death for Rorke because the warden, Morbillon, is the brother of the officer he killed. Their war of wills is the main event of the story, but Carse broadens its scope a little by shifting focus midway through to a third character, the young guard Geurot who sympathizes with Rorke once he learns of the American's heroism and comes to hate Morbillon's cruelty. He ends up collateral damage in the other two's private war, imprisoned after intervening to stop Morbillon from caning Rorke and finally striking his commander. While Rorke's rage for revenge sustains him, Geurot sickens rapidly but manages to smuggle Rorke a file for his latest escape attempt. When the American escapes his cell, he turns fatalistically selfless. No longer concerned with his own getaway, he confronts Morbillon to force him to free Geurot. "I got no way of saying it," Rorke says, presumably translated from his limited French, "I ain't got the words. But what the hell do you think a man is?" A bit implausibly, Morbillon seems to figure it all out in the end. He knows already that the old order's going to change; a committee of journalists with strong political backing back home is coming to investigate the prison. "Always we have blinded ourselves because we have been willing to die," he says of his family, "And the world is not that way any more. It has stopped being that way....France and the penal code. France -- That code is the only thing which has not changed, and which should be changed." He now expects his own court-martial to effect that change as Rorke, grateful but somewhat uncomprehending, goes his way. One suspects that at the last moment Carse turned his villain into a mouthpiece for his own opinion, though there's no "Camp Fire" comment this issue to confirm that. A Devil's Island story easily could veer into sadomasochistic territory, but Carse keeps things tasteful, concentrating on the prisoners' isolation and deprivation and how they can drive men mad. Without much violence, he conveys the extremity of the experience in a manner that no doubt chilled some original readers, while closing on an optimistic note that suggests that this, too -- like anything else in the pulp world -- could be endured and overcome.
Posted by Samuel Wilson at 3:31 PM