'To a destroyer every submarine was an enemy' 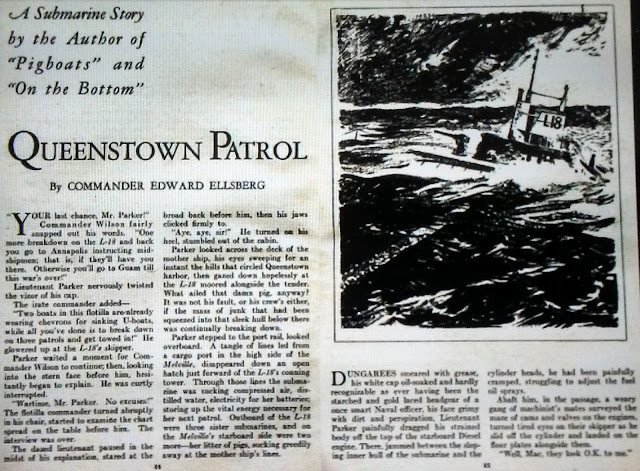 Edward Ellsberg specialized in underwater salvage, winning fame and a congressional commission for raising a sunken submarine in 1926. As Commander Ellsberg he wrote submarine stories for Adventure, including "Queenstown Patrol" (November 1, 1931), a World War I yarn noteworthy for an unromanticized view of the war that wasn't really atypical of its time. It concerns the perils of the L-18, an American sub hunting for German U-boats. Its commander, Lt. Parker, has trouble enough keeping the "pig" in one piece. A big part of the problem, so one of the crew tells us, is its fine American craftsmanship.

"What ails this tub, anyway? [Parker asks] The other pigs've managed to keep on moving?"
"The way she's built, I guess," answered McCarthy. "She's a war baby. Some shipyard made a record on 'er -- built 'er complete in four months from duct keel to connin' tower; sorta stunt to show how they was doin' their bit to win the war. An' this is the result. Nothin's right. When it's not one thing bustin' down it's two. I wisht I was back on a battlewagon. This bucket's gonna be our finish sure."


L-18 is soon on the trail of the U-6, but The Enemy Below this is not. Both subs have to dive for cover when an Allied destroyer starts dropping depth bombs indiscriminately. "Was it meant for them or the U-6? Who knew? To a destroyer every submarine was an enemy. Shoot first, investigate afterward." The subs nestle in the muddy bottom until the coast is clear, then resume their own duel. Parker maneuvers the L-18 until the pigs are face-to-face as in a Wild West shootout, but Parker's gun jams. To be more precise, the sub's bow cap jams, making it impossible to fire torpedoes.

"What had sprung the shafting, jammed the operating gears?" Parker wonders, "Rotten construction? Those depth bombs last night? No difference now." All that matters is whether the crew can coax the L-18 into diving fast and deep enough to dodge a German torpedo. The epic of errors ends with a happy surprise: U-6 somehow blew itself up with a cockeyed rudder sending the torpedo back at its owner like a boomerang. The moral of the story is, "I guess Heinie's pigboats ain't no more reliable than Uncle Sam's." Just the same, L-18 will claim the kill and Parker and his crew will be heroes. Such is war. Ellsberg would continue writing for Adventure, and occasionally for other magazines, until the next world war, when sentiments of the sort expressed in "Queenstown Patrol" were once more unwelcome, and Ellsberg had real work to do again.
Posted by Samuel Wilson at 3:09 PM