'When a puny fool gives orders, inkosi, what can men do but laugh?' 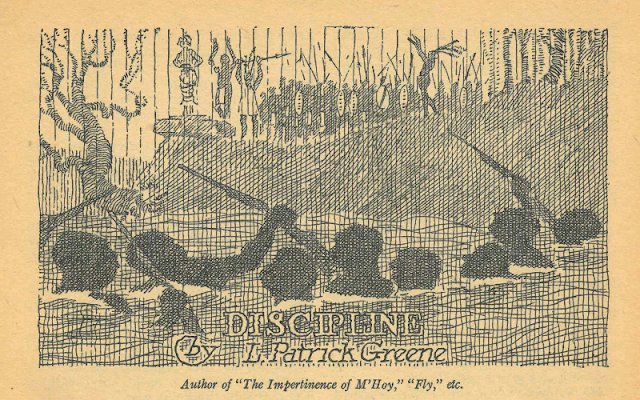 L. Patrick Greene is best known now for his series of pulp stories about "The Major" and his sidekick Jim the Hottentot, but on the side he was the Georges Surdez of British imperialism in Africa. That is, Greene wrote a good number of stories dealing with the challenge of military discipline amid the clash of personalities in a military and colonial hierarchy. "Discipline" (Adventure, March 30, 1926) is an obvious case in point. Simmons, our protagonist, is tasked with whipping the Black Watch of the British South African Police into shape. They're an awkward squad, inconsistently uniformed and clumsy in half-hearted drill with that inattention to cleanliness than considered characteristic of nonwhite peoples. Simmons gives them a stern talking to, breaking their complacency to remold them into some semblance of soldiery.

'Pigs!' he ejaculated. 'Pigs!' he said again, very slowly, as his finger traveled down the line.
The men stiffened perceptibly.
'You do not like to be called pigs, eh?' Simmons said with a harsh laugh. 'Then you must have pride and you are not altogether lost to shame. And yet --' the men squirmed under the lashing sarcasm of his voice -- 'I should have called you buloyi; I should have pointed my first finger at you. But, see how merciful I am, I only call you pigs.'
A cloud of dust arose from their embarrassed scuffling.
'You are liars, all of you,' Simmons continued in an even, unimpassioned voice. 'By your mouths you proclaim yourselves to be men and warriors of the great white chief, but by the filthiness in which you live it is plain that you are no men. No. Not men, but brothers to the dog-apes. Tchat! I spit your filth from me! I weep for you.'


This has a positive effect because many of the men do have warriors' pride and they are capable of shame, even if they want to blame their lax ways on their corporal, whom they disdain as a "puny fool." They respond well to harsh drilling, but a busybody English missionary, Banning, doesn't like what he sees when Simmons sends his men charging through a patch of thorns. The missionary, one of a brother-sister team, is determined to have Simmons written up for brutality. Greene wants us to recognize Banning as a naive idealist; the one thing he doesn't understand, it seems, is force. He doesn't take Simmons seriously when the officer warns that the missionary has hired porters from a hostile tribe, and sure enough, the tribe ends up kidnapping Banning's sister with intent to sacrifice her to one of their gods. "The curs! And I treated them like friends!" Banning protests.

The payoff reminds us that Greene was the creator of one of the more consistently heroic black characters in pulp in Jim the Hottentot. When the time comes to carry out a rescue mission, Simmons is prostrated by fever, and it's up to the Black Watch, including the "puny" corporal, to vindicate their commander's methods and his ultimate faith in them as men. Their mission, Simmons says, is "only another lesson in discipline. For us as well as them." The Black Watch, it turns out, has new pride in their imperial role. "Our voices are the voices of all white men," their top man tells the hostiles. In the face of the enemy's defiance, they ford a deep river, scatter their foes with disciplined, non-lethal fire and rescue Miss Banning. For some modern readers, the climax might reveal the Black Watch as tragic sellouts, brainwashed by the British, but Greene obviously had a different intention: to show that Africans were capable, if not of civilization as whites knew it, then of that discipline that arguably forms the foundation of any civilization. In short, "Discipline" is meant as a positive, if patronizing, portrait of black men, whatever people may think of it nearly a century later.
Posted by Samuel Wilson at 12:00 PM