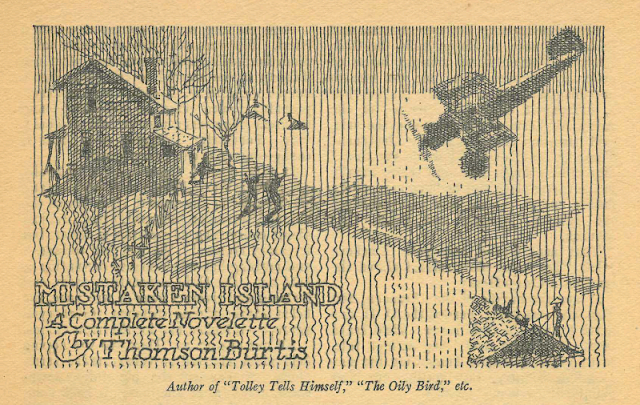 Thomson Burtis broke into pulp in 1920 and quickly made himself a star of Adventure magazine, specializing in aviation stories. Two of his longest-lived characters were army fliers Slimuel X. Evans (usually just "Slim") and Tex McDowell, who star in "Mistaken Island" (Adventure, March 30, 1926). I'd found earlier stories of Slim and Tex to be rather stilted affairs, but by this point, with Slim now a self-deprecating narrator, Burtis seemed to have found a comfortable storytelling voice, though it clearly made editor Arthur Sullivant Hoffman a little uncomfortable. He cut any hint of blasphemy out of the stories he published, which means, on this occasion, that many oaths and adjectives disappear, though readers could guess easily enough what Slim or other characters were saying. "This is a --- farce!" Slim protests at one point, "And by --- I'm getting tired of standing here talking in circles to you three bozos here for no reason." The three bozos are a motley crew of disreputable types holed up with an apparent prisoner on an island in the flood-swollen Ohio River, on which Slim and Tex have to make an emergency landing. They first big mystery is that the trio seem to recognize Slim and Tex, even though our heroes have never seen them before. It turns out that they know the pilots by reputation, as related by the pilots' colleague, Hal Ellis. The problem with that explanation, however, is that our heroes have no idea who Ellis is. Ellis proves to be a charismatic scoundrel, not to mention an imposter, vying with the island trio, his erstwhile partners, to claim a bounty on the trio's prisoner, a hillbilly feudist. Burtis seems to be planning for the future while introducing Ellis, giving him an extensive backstory while putting a detailed description of the man in Slim's mouth. "I've seen some types in my time," Slim also observes, "but Mr. Happy Hal Ellis wins the slightly used beef-stew as far as I'm concerned, and I don't know whether I can explain the reasons for that statement or not." I know I can't.

Hal Ellis is slick enough to convince our heroes that he's the good guy in the scenario they've stumbled into, and to convince his enemies to play him, Slim and Tex in an epic card game for the rights to the prisoner. Playing for matches, the gamblers embark on a 72-hour marathon. "In poker, as in flying and other things, I sort of muddle through," Slim observes, but despite some reservations about Ellis's "somewhat mangy proposition," he and Tex decide that it'll be fun to play, especially if they can share in the bounty on the prisoner. "It all comes down to one explanation -- a couple of cuckoo flyers couldn't turn down a chance for excitement," which probably was what Ellis was depending on. Reserving his own strength and sobriety while the others exhaust or inebriate themselves, Happy Hal simply waits for the moment to start a fight so he can get away with the prisoner and keep the bounty all to himself. The island threesome provides the pretext by actually cheating at cards, but Slim and Tex learn that they're actually more in the right than Ellis was -- which makes it a good thing that they're able to stop him from flying away with his captive, though Ellis himself gets away, presumably to fight another day. "Mistaken Island" is easily the best Burtis story I've read to date, and while that isn't saying much considering what I've forced myself through before, it's actually good enough to make me more willing to seek out stories of Slim and Tex in the future.
Posted by Samuel Wilson at 12:00 PM