'Are there no small magics among the white men?' 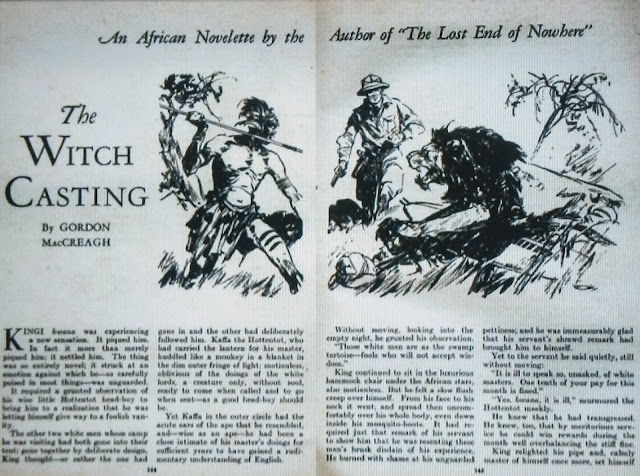 Kingi Bwana,  American troubleshooter in Africa, probably was Gordon MacCreagh's most successful creation. MacCreagh, who went on safari for Adventure in 1927, published stories about Mr. King in that magazine for a decade, from 1930 to 1940. Like any good pulp hero, King had reliable sidekicks, the Mutt and Jeff team of Kaffa the wily Hottentot and the lordly Masai warrior Barounggo. People reading MacCreagh's stories today might be able to accept Barounggo as a badass, but however clever Kaffa is shown to be, it's got to be hard for modern readers to get past the author's favorite description of the Hottentot as a "wise ape." They're less politically correct templates for N'Geeso the pygmy and Tembu George, the American turned Masai chief, of Fiction House's Ki-Gor stories. Barounggo doesn't get too much to do, apart from kill a lion, in "The Witch Casting" (Adventure, November 1, 1931), while Kaffa's early suspicions of an American doctor on safari with his millionaire employer, for which King docks the impertinent African ("It is ill to speak so, unasked, of white masters.") one-tenth of his monthly pay, albeit with a promise of restitution for meritorious service, are ultimately vindicated. King senses something fishy about the safari himself, but he has white prestige to hold up. In any event, he's invited by ailing businessman Chet Howard, who's come to Africa for rest and recreation, to act as a hunting guide, but his personal physician, Dr. John Gerardi, clearly doesn't want him around. It takes a while for King and the reader to guess what exactly Gerardi is up to, if anything, for Howard thrives in Africa, proving an enthusiastic and effective hunter. If anything, there's a danger of him going native.

Howard leaped high and screamed his kill. Black forms leaped and screamed around him. Swiftly converging forms and darting spears marked the end of the drive. Uncouth leapings, howlings, wavings of weapons announced triump....Sharp blads quickly gashed throats to let the still warm blood run. Black men bathed their thighs and their foreheads in the thick welling liquid. White man Howard bathed and shrieked with them.
King looked down on it all, very still, very serious, with the beginning of understanding in his eyes.
'Good Lord, just like one of them,' he muttered.
Kaffa, still too, like a watching creature of the wild and quite as frightened, understood.
'No, bwana,' he whispered, 'Not just like one of them. He is one of them.'
King let minutes pass while he watched the orgy. Then explosively --
'And that, by God, is the witchcraft of this thing.'
'Yes, bwana,' said Kaffa with conviction, 'He is a lion man.'
'Who?' said King sharply.
'The witch doctor of this place, bwana. A man who can turn himself into a lion can surely turn a white man into a Dodinga savage.'


King's initial suspicion is that just such a witch doctor has put a spell on Chet, even though that would break a taboo against enchanting whites imposed by a friend of King's who is a very powerful "wizard," mind you. Our hero takes the idea of a "lion man" somewhat seriously, equating it with "the old werwolf belief. Lycanthropy, the scientific gents call it." the idea is not that a man physically transforms into a beast, but that he becomes convinced that he has, and acts accordingly. "Science knows it's possible," King reminds his Jewish trader friend Yakoub ben Abrahm, while the wizard suggests, "Are there no small magics among the white men?" After all, "That is no very hard magic. It is but making a pattern in the soft thing that is a man's mind. Is there no white man who knows how to plant the seed of a thought in a man's mind and then, by a careful watering with words, make that seed grow? That is a little thing that is not even magic."

King knows of such a white man, but doesn't share his knowledge with the reader until almost the end. He had asked Dr. Gerardi earlier who he had worked under in South Africa, and the doctor dropped a name that King identifies later as a hypnotist. King can leave this reveal in reserve until he figures out a motive for whatever Gerardi is up. Gerardi can mean no good for Chet, but if he wishes his employer ill, why not poison him, and why not at home in America? Yakoub makes the crucial suggestion that the death of a recklessly healthy man would not be considered suspicious. "You're the very devil," King compliments the trader, "Only a devil could think of such things." To which Yakoub answers, "For much money, my friend, many men have become devils." One King learns that Chet is going on a lion hunt, using only native weapons, all becomes clear. It's the test of a young man and Chet isn't equal to it, but Barounggo is luckily around to save the day. It's a nice touch on MacCreagh's part that it's not up to Kingi Bwana to kill the lion, and "Witch Casting" is a pretty good early story in the series. You wouldn't know from this story that MacCreagh was an experienced African traveler, though he may have been only a superficial observer of Africans, but he is a pretty good pulp writer and if you don't get hung up on the more embarrassing tropes of old fiction MacCreagh's stuff is usually worth reading.
Posted by Samuel Wilson at 4:23 PM