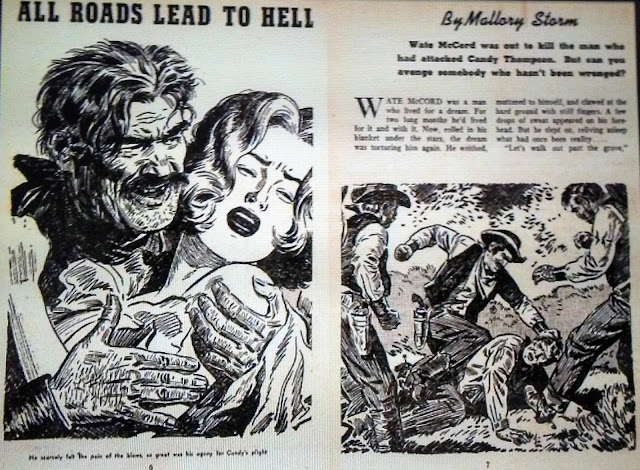 Ziff-Davis never was a major player in the pulp game, its best-known title being Amazing Stories, the pioneer sci-fi mag it acquired in 1938. During the 1940s the company began to expand into other genres with oversized publications using the Mammoth label. Mammoth Detective was the first of these to appear, in 1942, but Mammoth Western, which didn't launch until 1945, lasted the longest of the group, maintaining a monthly schedule from October 1947 to its demise at the end of 1950. At its peak it was genuinely mammoth by contemporary pulp standards at 194 pages an issue, but by the end of the trail it had dwindled to 130 pages, equal to most western pulps but smaller than the Thrilling group's copycat magazine Giant Western. Some major genre writers published in Mammoth, but it seemed to be dominated by a stable of Ziff-Davis house writers working under house pseudonyms. Does anyone who really wrote "All Roads Lead to Hell," the lead story in the December 1950 issue, under the name Mallory Storm? I wonder if it was editor Howard Browne, as I assume that some editorial indulgence was necessary for "Storm" to get away with something I didn't really expect to see in a pulp magazine.

"All Roads" is a vengeance story with a twist that is nearly given away by the opening blurb, which asks, "Can you avenge someone who hasn't been wronged?" Our avenger is Wate McCord, who saw his beloved Candy Thompson stolen from him and apparently raped by the villain, Bill Queen. McCord tracks Queen to a hell town in The Nations, where Candy works in a house of ill repute but assures Wate that "I've known only one man -- only one." Since Wate knows who that one man is, he's still more determined to take revenge on Queen, while the villain, for his own part, is oddly reluctant to eliminate a man he knows to be an avenger. From the time a more obvious good-girl character, Patricia Morely, is introduced, you can guess that there won't be a happy ending for Wate and Candy. Patricia is attended by her cousin Neal, a mute with his own grudge against Bill Queen, the man who cut his tongue out. This is convenient for the reader should Wate turn soft, but for a while we're uncertain of Neal's motives. He offers (in writing, of course) to help Wate set a trap for Queen, only to make it look like he's trapped Wate (and Patricia) for Queen. Neal is thinking several steps ahead of everyone else, however, knowing that he has to double-cross Wate in order to get Queen where he wants him. Once that happens, Neal changes into "a drooling, eager animal" who slowly tortures Queen to death while "giving out a sort of mad, obscene lullaby" while Wate and Patricia remain helpless. His work on earth finished, Neal cuts the others free and shoots himself in the head.

Then Candy arrives at the scene and jumps to the conclusion that Wate had butchered Bill Queen. Taking the trendy "adult western" genre to an extreme Hollywood dared not equal, "Mallory Storm" has Candy "become a raging, fighting fury" who screams at her savior, "You son of a bitch! I'll kill you! I'll cut you to pieces just the way you did him!"

"Candy -- for God's sake, Candy! What's happened to you?"
"Happened?" she screamed back, "I met a man, that's all. A better man than you cold be in a thousand years!"


Candy proceeds to describe her rape in relatively modest detail ("We fought until he had me stripped naked, and he was bleeding wehere I'd bitten through his ear and his lips."), revealing that she liked it precisely because Bill Queen wasn't a "wishy-washy country bumpkin [who] fell over his feet every time he asked me for a kiss." And so, "We had each other there in the bushes while you were eating dirt back in the grove."

Well damn. To his credit, Wate takes it without rancor, and to the author's credit, we're left feeling that Bill Queen was unworthy of Candy's love, given the "lascivious eyes [that] reflected perfectly his intentions toward" Patricia before Neal jumped him. And before you think the worst of Candy, we learn that she's the one who kept Queen from killing Wate. On that note of reconciliation Candy goes her own way while Wate gets the good girl. I might have expected such frankness, to use the buzzword of the time, from a paperback original, but not from a 1950 pulp magazine. But perhaps that just means I haven't read enough from the time period. In any event, "All Roads Lead to Hell" isn't exactly a great story, but it sure is a memorable one.
Posted by Samuel Wilson at 3:28 PM

Email ThisBlogThis!Share to TwitterShare to FacebookShare to Pinterest
Labels: western