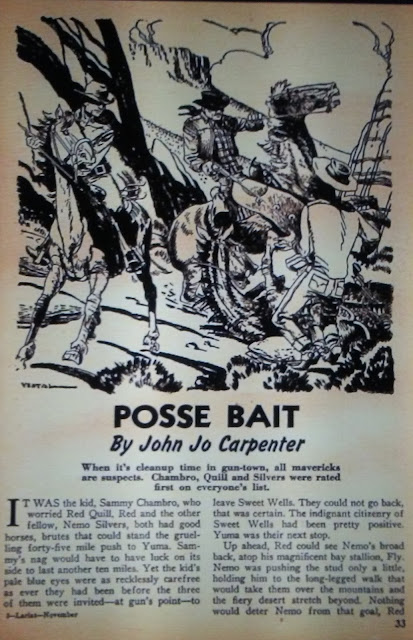 Of the Fiction House line of western pulps, Lariat seems to have featured the most mature, or at least the most sophisticated stories. It promised "Cowboy-Life Romances," but like many a self-styled romance western (e.g. Ranch Romances or Star Western from the late 1940s on) Lariat's contents were often just as tough or hard-boiled as any non-"romance" title. Some Lariat stories had no romance content whatsoever. The November 1947 issue, for instance, sports a short story by John Jo Carpenter, a journeyman writer who broke into pulp around the time the U.S. entered World War II. "Posse Bait" intrigued me not for its romance elements or lack of them, but for stylistic elements I didn't expect to see in a 1940s pulp. The story itself is pretty simple: three cowboys of poor reputation are warned out of a town and expect a posse to descend upon them at any moment. Along the way, one of the three contrives to eliminate the others, succeeding the first time and failing the second, because he's actually in cahoots with one of the posse. Perhaps because it's so simple, and because Carpenter was being paid by the word, he had time with a short story to experiment a little, putting it most generously, or simply to pad the thing a bit. One of the fugitives is getting "light-headed" and starts to ramble on various subjects, to the irritation of the eventual villain of the piece, who'll use the other man's light-headedness as an excuse to shoot him, claiming that his victim, in his delirium, was going for his own weapon to kill the other two cowboys. This light-headedness allows Carpenter to throw in several paragraphs of grandly irrelevant dialogue, in a departure from pulp's usual expository efficiency. Apropos of very little, the doomed Sammy tells how he came to own the horse he has to shoot.

"I win thirty-six dollars off James Packrat, the Yaqui that tends stable for Dick Sparling," Sammy said, paying no attention to Nemo, "Then I win his horse, that fine little pinto mare he sets such a store by. Then I win his wife's sewing machine, and four dollars she had buried in the sand. Then James didn't have no more to lose, see? And when he went to turn over the stuff to me, he cried with his arms around that pinto's neck, dogged if he didn't. So I said, go bring me some kind of a horse and he could have the pinto back. So he brought me this one. Ain't he a card?"


For Sammy's two companions this is debatable proof that he's going loco, but to me his little digression seems to anticipate the much more digressive style employed in crime fiction by George V. Higgins and Elmore Leonard, in which seemingly irrelevant narrative serves to set a mood or create tension as the reader begins to wonder when something will actually happen. In "Posse Bait" Sammy's rambling escalates the tension as Nemo, the villain, grows increasingly impatient with it and the hero by default, Red, wonders whether Sammy is going crazy or not. It's a nicely organic way to pad out a short story and it gives Carpenter's story an unexpectedly modern touch. I'm still working my way through this particular issue, and I still have stuff from tophand writers like H. A. DeRosso and Les Savage Jr. yet to read in it, but this little story from a relatively unknown author sets a pretty decent standard for the rest of the contributors.
Posted by Samuel Wilson at 5:38 PM