'Nothing to be afraid of, anyway. All I need is another drink.' 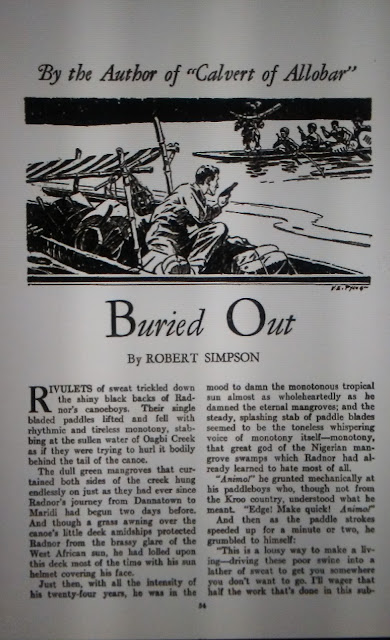 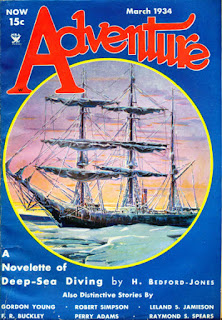 Guessing from the titles of his stories, it looks like Robert Simpson specialized in tales of Africa. Apart from one 1922 appearance in The Saturday Evening Post, Simpson spent his whole career in the pulps, and mostly in Adventure. "Buried Out" (March 1934) is a misadventure of a British imperialist in Nigeria. Radnor, our protagonist, is on an upriver mission but finds himself abandoned by his "paddleboys" when he fishes a mysterious doll out of the water. With mangrove trees nearby Radnor names his new toy "Old Man Grove," and for all I know that may have been the story's title at one point. Along the way he acquires something like comedy relief in the form of a Sierra Leonean bureaucrat. Gulliver Anthony Dorr is an African version of the archetypal "babu" of India tales, the superficially educated butt of colonial contempt. Describing a more successful brother, Gulliver explains that "Absalom exhibited an adolescent idiosyncrasy to become quite adequately acquainted with the forest primeval." Simpson attempts to explain Gulliver himself, though it's unclear whether this is the author's objective opinion or Rador's prejudiced one.

This individual had been born of simple and well intentioned colored parents in Sierra Leone, who had made the mistake of sending him to the native college there to educate him for better things, with the result that Gulliver Anthony had concentrated principally upon the dictionary....Arrayed in spotless drill, he wore a flowing tie of lavender and orange stripes that made no pretence of matching a polka dot shirt, while about his waist was a cummerbund that was probably cerise in a better light. The hilt of a knife and the butt of a revolver stuck prominently out of the cummerbund, and on his crinkly head Gulliver Anthony sported a wide-brimmed panama that wa sturned up in front and down in back. The ensemble, in a colored revue, would probably have been very successful. Just then, however, the scene was Oagbi Creek at sunset and Radnor was in no humor to see the joke.


Simpson makes a point of emphasizing, however, that Gulliver's brother Absalom, an overseer is "one of the best in the business" and the man who'll actually be teaching Radnor the ropes of his new job should he make it there. This being a pulp story, once Radnor begins to have scary dealings with a powerful witch doctor (who needs to reclaim "Old Man Grove"), I began to suspect that this sinister figure blowing a bugle was probably Absalom Solomon Dorr. The climax is half horror, half humor as a tipsy Radnor gets the scare of his life from the mysterious bugler ("If you blow that damned bugle again, so help me, Hannah, I'll let--you--have--it!") and his legion of "human water snakes" threatening to capsize Radnor's canoe. All ends well, however, as the witch doctor was not A. S. Dorr and G.A Dorr, whom Radnor had beaten up sometime before the story proper began, saves our hero by reaching the British authorities and bringing them to the scene of the action. I inferred from the ending that Simpson may have intended "Buried Out" as the beginning of a series about Radnor and Gulliver, but it proved to be the last story he published. This issue's "Camp Fire" column reports that Simpson had died on January 7, 1934 "following a long and courageous fight that proved unavailing."

Posted by Samuel Wilson at 4:17 PM