'The Islands were not being tamed by prayers and good wishes.' 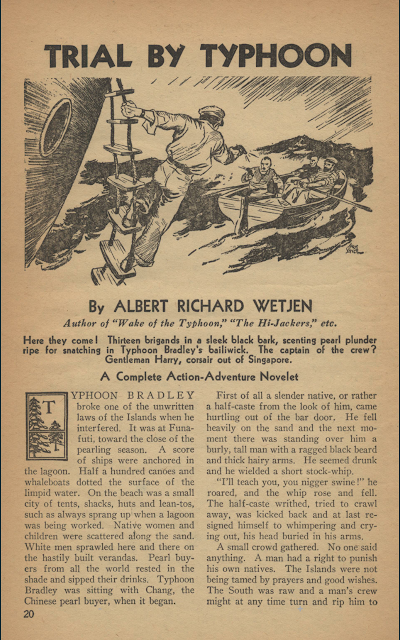 Albert Richard Wetjen wrote many a South Seas adventure story using different variations on the same basic character template, yet made a point of insisting that his heroes were all distinct personalities inhabiting what we'd now call the same "universe." His first such creation was Shark Gotch for Action Stories, starting in 1927, while the best known (in Wetjen's own time, at least) probably was Wallaby Jim, whose hardly toned-down adventures appeared in Collier's, one of the top slicks, and were made into a movie. In between came Typhoon Bradley, introduced in the September 1931 Action Stories after Shark Gotch was retired (for a time) earlier that year. Shark Gotch remains a point of reference in the Bradley stories."There are three men who can draw faster and shoot straighter than I can," a villain says in "Trial By Typhoon" (September 1932), "Those men are Larsen of Singapore, Shark Gotch and Typhoon Bradley." I'm not sure where Larsen appeared but I don't doubt that Wetjen had written stories about him. Wetjen would continue this self-referentiality in the Wallaby Jim series, in one episode of which Gotch, Bradley and others put in cameo appearances. "Trial" is the first Bradley series I read, and on that evidence he seems like a perfectly generic South Seas hero: big, strong, hard-boiled and fast on the draw. Noting Wetjen's emphasis on Bradley's gunmanship, I understood why Ralph R. Perry made a point of describing his South Seas hero, Bellow Bill Williams, as a lousy shot. It differentiated Bellow Bill from Wetjen's supermen -- which is not to say that Wetjen is the inferior writer, but that he and Perry really were writing two different kinds of story. Perry's are closer to thrillers in their emphasis on the obstacles to Bellow Bill's success, while Wetjen's are, well, action stories understandably focused on the hero's fighting prowess.

In this one, Typhoon Bradley makes an enemy by stopping a nasty captain from flogging a native crewman accused of petty theft. He "broke one of the unwritten laws of the Islands when he interfered," Wetjen opens, "A man had a right to punish his own natives. The Islands were not being tamed by prayers and good wishes. The South was raw and a man's crew might at any time turn and rip him to shreds if they thought him soft enough." Despite that, Bradley's humanitarian impulses compel him to beat the crap out of the captain, and as it turns out, if anyone has the right to interfere it's the temporary magistrate of this particular island, Typhoon Bradley. Concerned to maintain law and order, he boards the captain's ship after hearing rumors that his arch-enemy, Gentleman Harry, is on board. I assume Harry was introduced in an earlier story, but for those, like me, who missed it, Wetjen explains that the Gentleman was once a suave character whose nickname has been a parody ever since Bradley broke his face in a fight. He's a slick one, too; he planted the rumor of his presence to get Bradley off the island while his men, the captain's crooked crew, cleaned out the island's pearl dealers in a mass mugging. Gentleman Harry's triumph over Bradley is nearly complete, but he suffers from recurring-villain syndrome, whether he's actually recurring or not. That is, despite the captain's urging to kill Bradley and be done with it, Harry wants to humiliate and torture Typhoon to avenge his ruined face. Neither he nor the captain reckon on that poor native crewman remembering Bradley's kindness and freeing him so he can wreak characteristic havoc on the bad men. When it comes to action Wetjen delivers the goods, though not quite with the gusto of Action Stories regular Robert E. Howard. Conscious of writing a series rather than a stand-alone story, the author contrives to keep Gentleman Harry alive to fight another day, but that day was long in coming if it came at all. Action Stories soon went on a nearly yearlong hiatus and Wetjen moved on to other projects. The FictionMags Index doesn't report another Typhoon Bradley story, apart from his cameo in Collier's, until July 1939. From then, Bradley alternated with Wetjen's more recent and more interesting creation, Stinger Seave, until Wetjen tired of him again.
Posted by Samuel Wilson at 5:57 PM