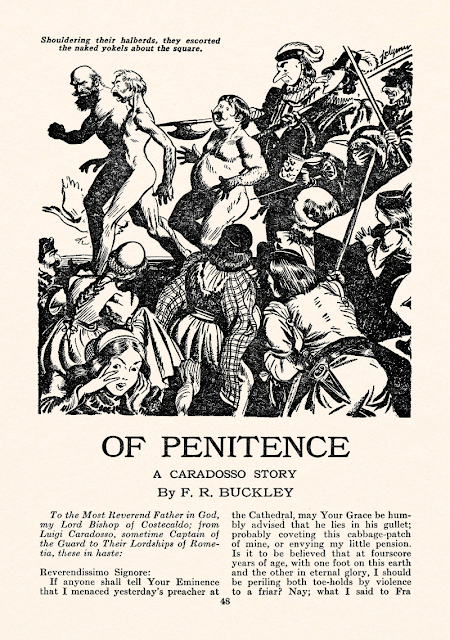 The Renaissance rogue Luigi Caradosso was one of pulp's longer-lived characters, making his first Adventure appearance in 1924 and his last appoximately thirty years later, in 1953. F. R. Buckley usually made an effort to give his character's often amoral tales an appropriately archaic flavor -- they are narrated in the form of reminiscing letters a retired Caradosso writes to his aristocratic patron -- but on at least one occasion he clearly meant his tale to have contemporary relevance. "Of Penitence" (June 1941) is primarily a cautionary tale of a young lord who lets a guilty conscience over some slight mischief get in the way of the ruthlessness appropriate to princes, by Caradosso's standards, and thus loses his land. The young lord's worst mistake is to show clemency toward a rabble-rouser, described by one observer as "a damned plasterer [who] wants to be a leader of the people like what's-his-hame at Florence. Finds talking easier than daubing an honest wall, I'll be bound." The demagogue calls himself Adolfo Illeri, and as Adolf Hitler got his start in beer halls, so Illeri orates atop a giant wine barrel, and as Hitler, as an Austrian, was an outsider in Germany, so Illeri is a Brescian interloper. "I have oft wondered why those who'd tell folk how to live in one country should usually come from some other," Caradosso opines, and Buckley may have had in mind here not only Hitler but immigrants to America who espoused Marxism. Caradosso's instinct tells him to get rid of Illeri as soon as possible, but just as the Weimar Republican wouldn't put Hitler down after the Beer Hall Putsch, so the young lord proves dangerously merciful, too interested in proving that "I am no tyrant."  After his misadventure, which involves beating up and humiliating the local night watch, the lord orders Illeri released without even trying him, telling Caradosso, "Who am I to judge my fellow man?" Who is anyone, our hero answers, "But if none did it, what would become of the world?" Sent out of the country, Illeri promptly sets up shop next door and resumes his rabble-rousing. The young lord's fatal flaw is his belief that dealing ruthlessly with the likes of Illeri would automatically make him the sort of tyrant he abhors, but his unwillingness to get his hands dirty killing one deserving man only guarantees the deaths of many undeserving others once he finally goes to war with Illeri's protector. The lord himself dies in the attack, guaranteeing that his land will fall to another, while Caradosso decapitates Illeri "as one might a puppy by a garden-walk." Perhaps this makes Caradosso, and by extension Buckley, an authentic Machiavellian, but it no doubt was easy, with much of the world at war with Hitler and the U.S. soon to join, to say that someone should have whacked that bastard long before. Whether Buckley was advocating preemptive assassination as a tactic for the 20th century is another matter. The nearest he comes in his "Camp Fire" comments to addressing contemporary issues is to note that in Italian history, the less fearless people became about criticizing tyrants, the more dangerous it became to do so -- "Which is something we might think over nowadays."
Posted by Samuel Wilson at 7:09 PM