'He's utterly amoral, Yank, if you know what that means.' 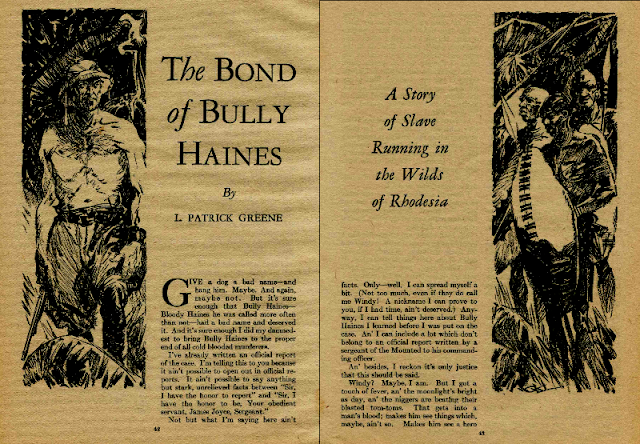 In "The Bond of Bully Haines" (Adventure, February 1, 1930), L. Patrick Greene grapples with the allure of the antihero, the outlaw with a code, and maybe confesses more than he meant to. The title character, a "recruiter" who raids African villages for forced labor, is seen from the conflicted perspective of an American narrator who eventually joins the Rhodesian police force. The narrator introduces himself getting rolled by "Yellow Rose," a mixed-race prostitute, and her "dago" boyfriend in Portuguese-ruled Lourenco Marques. They beat him up again when he wakes up and wants his money back, but his rage against them vanishes when Bully Haines, just out of prison, appears in the dive to fulfill an earlier vow of revenge. Greene sets the ambivalent tone by having Haines arrive with a beam of sunlight flashing through the doorway into the dark dive. The narrator sees the denizens cowering as if they fear the light itself, as if they're vampires. He soon realizes that Haines may be a worse monster than any of them. He vowed to kill the dago and disfigure Yellow Rose for having ratted him out to the authorities, and the narrator watches in horror as he carries out his vow. Forgetting his own grievance, he tries to rescue Rose, only to be flung aside by Haines. Yet when a group of "dago" policemen arrive to arrest "Bloody Haines," our hero feels an impulse to defend him. He's dangerously fascinated by the idea that Haines always keeps his word. Told by a friend that Haines has "never been known to go back on that," the narrator goes off on a racial rhapsody.

"He must be a real white man, then," I said, thinking of the men of the West I'd known -- square, honest, law abiding men whose word was their bond. But Doc looked at me queerly. And he said:
"It all depends, doesn't it, on what sort of word he gives? But he said he'd mark Yellow Rose. He said he'd kill Pedro. And he did. He's utterly amoral, Yank, if you know what that means. And, if you're wise, you'll never get in his path...."


Yet he can't help admiring the way Haines sweeps up the head policeman and spanks him in front of everyone, fifty slaps for the fifty lashes he took in prison. He can't help not liking it when two more policemen skulk toward Haines to hamstring him with their knives.

Say, I couldn't sit there an' see that happen. Maybe there ain't no justification for what I did. Well, what of it? I ain't looking for justification; not in this world anyway. Maybe Bully Haines was a murderer, an' all the things I've since learnt about him, an' deserved what looked like coming to him. Maybe, I say. But I didn't stop to consider anything like that. He was, as I saw it, then, a white man, an' white men have got to stick together.


Our hero puts Haines in his debt by his intervention, though Bully naturally boasts that he could have taken care of all the cops himself. As this is a pulp story, you can guess pretty confidently that Haines will repay his debt, no matter how evil he's shown to be in the narrator's own judgment. The Texan is a casual racist himself, routinely using the dreaded n-word to describe the people of Africa, but he tells us that he came to like and respect many Africans -- "They can teach a white man a lot if he's willing to learn" -- while on the evidence of his antagonist's atrocities "I reckoned Bully Haines didn't think of niggers as people. He couldn't have done things that way, else." As an officer of the law he's sincerely dedicated to hunting down and destroying Haines.

And yet, when a moment comes when it looks like Africans are going to carry out vigilante justice against Haines, most likely the slow, spectacular way, our narrator reverts back to the form he showed in the Lourenco Marques dive. He has the drop on Haines when a vigilante leader charges in.

I shifted my aim. God knows why. I'd got nothing against the nigger. He was going to do what I hadn't the nerve to do. An' yet, seems like I've only had one creed knocked into me ever since I was knee high to a yearling. White men must stick together. I ain't trying to justify myself. I'm stating facts. I shifted my aim, an' the nigger fell.


It's as if, in L. Patrick Greene's mind, some race-instinct in some way makes all whites, or all self-conscious whites, complicit in the crimes of the worst by refusing to make them accountable to their victims. Of course, this is also the standard pulp trope you see most often in westerns when whites must convince Indians that white villains who've wronged them must be left to white man's law. The implicit argument often is that aboriginal peoples are too inclined to carry justice to sadistic excess, but back of that is some fundamental if not instinctual (according to pulp thinking) refusal of accountability to the other. Suffice it to say, of course, that Haines rewards our hero's impulse of solidarity by remembering the debt he owes the man, which our hero himself claims to have forgotten. Our hero and his men are in the path of indiscriminate vengeance, but Haines negotiates their safe withdrawal on the condition that he will return to accept the vigilante tribesmen's justice. They accept the deal, and our hero assumes that Haines will renege. Haines even says so, but this turns out to be a necessary lie to get our hero out of harm's way, after which, with our hero unable to stop him, Bully Haines recrosses the river to keep his last word.

In the end, Greene makes his narrator admirably inarticulate. Haines was "A bloody villain, if there ever was one. But wasn't he something else, too? I dunno! This blasted jungle fever fogs a man's judgment." I'm not sure Greene himself really reconciled the ambiguity, but he may not have though it possible. It all put me in mind of the scene in The Wild Bunch when William Holden argues with Ernest Borgnine over Robert Ryan's siding with the railroad detectives hunting them. Holden rejects Borgnine's vilification of their old friend, reminding Borgnine that Ryan had given his word to his new employer. Borgnine answers that it's not your word that matters, but who you give it to. With Bully Haines, you have to ask why it should matter that he keeps his word when you consider everything else he does. For the narrator, keeping one's word is "white," but to admire Haines for keeping his word is pretty much to betray the narrator's own principles as they've evolved over his time in Africa. You might ask how likely it is for as unprincipled a person as Bully Haines to keep his word consistently, but to question that premise probably misses the real point. From the "crime does not pay" standpoint, the idea of the outlaw who lives by a code is a dangerous illusion, or an excuse to admire utterly undeserving characters. In the case of Bully Haines, admiration for an outlaw's code seems even more like an excuse to avoid a necessary reckoning, even as Greene and the narrator recognize explicitly that Haines is as much a product of an oppressive system as he is an original sinner. Speaking for myself, those stories where the officer has to protect the white outlaw from the angry natives never really ring true. Maybe I'm wrong, but I'd let the people with the grievance have those bastards.

Posted by Samuel Wilson at 5:11 PM