'I'm going back to white man's country, where you can see what you're fighting!' 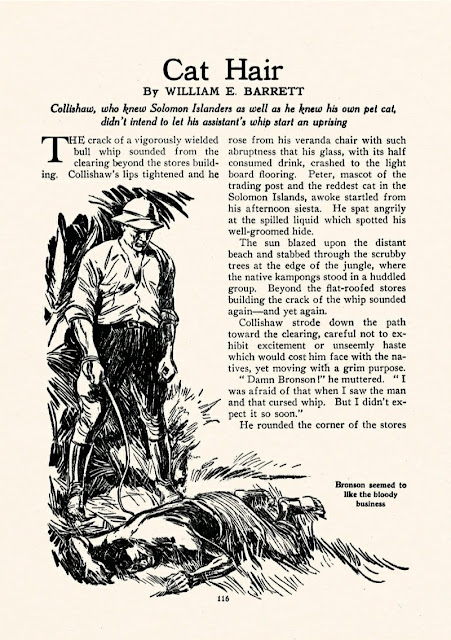 Let's start a hopefully more productive new year with a trifle from the November 12, 1932 issue of Argosy. William E. Barrett's "Cat Hair" is a story of white men in the Solomon Islands, part of a genre that never ceases to fascinate me. What fascinates me about the genre, set in Africa most of the time, is the ambiguity of the stories' superficial racism. The whole genre most likely qualifies as racist because Africans and other natives are shown consistently to be subordinate and ideally subservient to whites. Yet black characters are often given heroic qualities, particularly those who serve as sidekicks to series characters like Jim the Hottentot in L. Patrick Greene's series about the Major. Heroism is conditional upon loyalty to the white man, of course, but subordination isn't necessarily synonymous with inferiority in these stories unless we're dealing with social status. As it happens, there aren't really any heroic native characters in "Cat Hair." What I like about Barrett's short story is its reversal of a familiar trope of such stories. The hero, Collishaw, drives a cruel and bigoted white colleague off the islands by playing on the white villain's susceptibility to superstition.

After seeing  the new man beat a "number one boy," Collishaw realizes that the new man is likely to provoke a native uprising that will wipe out the good whites as well as the bad. He can't openly reproach Bronson, as "He was too old a hand to take sides with a native against white authority, no matter how abused that authority might be." But when Bronson proves hatefully intractable Collishaw conspires with a native servant to put a permanent scare in the goon. He sets up a scenario in which the native will be caught trying to take some of Bronson's hair for a voodoo-style ritual cursing. He reassures Bronson that the man has only gotten away with hair from Collishaw's cat. When the cat turns up dead soon afterward he allows Bronson to draw his own conclusions, assuring a happy ending for all but the cat. In a move that might offend some modern readers, Collishaw sacrificed his pet, poisoning it to cinch the illusion of evil magic and frighten Bronson out of Africa. The modern reader might be forgiven for asking why Collishaw didn't just kick Bronson's ass, but a story like this is a window opening out to, if not a funhouse mirror reflecting another world -- or at the least it shows us how people from 86 years ago or so saw how their world worked.
Posted by Samuel Wilson at 6:50 PM