'Do not forget, sheik, that brave sons and virtuous daughters are the offspring of mothers!' 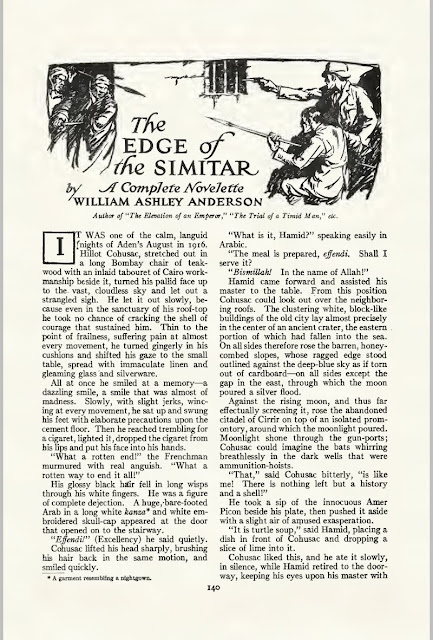 William Ashley Anderson's fiction career extended from 1914 to 1973, and the man himself lived to be 98 years old. He had a run of stories in The Saturday Evening post in 1919 but spent most of the 1920s in the pulps, mainly in Adventure. "The Edge of the Simitar" (July 30, 1924) is a tale of exotic espionage during the Great War that owes a little something to Talbot Mundy and maybe a little something more to John Buchan. Our hero is an ailing Frenchman, Cohusac, who's stirred from his torpor in isolated Aden when a British friend informs him of a conspiracy afoot to establish an Islamic regime in Christian Ethiopia. As Germany has for some time pandered to Islamic resentment of the French and British imperialism, and given Ethiopia's reputation at the time for invincibility, such a conversion could tip the balance of power in Africa and beyond. Suspicion focuses on an American, Sevier. His nation is still neutral in 1916, and his personal alignment is uncertain. Believing this American instrumental in organizing the planned Abyssinian coup, Cohusac concocts a plan to get him driven out of the country.This involves him disguising himself as a hunchbacked troubador, the better to serenade a local lady, allegedly on the American's behalf, thus creating a scandal. This silliness is necessary, in retrospect, to introduce us to the true mastermind of the conspiracy: Miriam, the object of our hero's serenade. Anderson portrays her as a sort of Muslim counterpart to Hilda von Einem, the German instigator of a Muslim conspiracy in Buchan's Greenmantle. As a Muslim, his villainess is even more exceptional, if not more formidable, than Buchan's. He emphasizes the discomfort of her male Arab con-conspirators.

Miriam was one of those amazing Mohammedan women who since the war have shown that many of the great movements in Mohammedan history have originated in the harimlik. She, a woman, an annoyance to men, was looked upon with universal respect for her intelligence. Despite this, however, the Mohammedans were too deeply set in their prejudices to approve of the boldness with which she went unveiled. Had she been in Arabia her conduct would have been considered of so immoral a character as to make it impossible for the sheiks and hadjis to treat her with anything but disapproval and contempt. The fact, however, that Somali women are never veiled, and Abyssinian women are not only unveiled but have also as much personal freedom as Europeans, made it impolitic, if nothing else, to express their disapproval openly.
At the same time, they never overlooked an opportunity to snub her if they felt they could do it in safety, since they feared her also on account of the power of witchcraft she was supposed to have -- reading men's minds, seeing through the covers of books, prophesying with accuracy.


The irony, as the story reaches its climax, is that Miriam knows something that Cohusac doesn't that makes all his efforts rather pointless. Sevier, she knew all along, is not the agent provocateur Cohusac and his British friend feared, but exactly the opposite: an agent of the British government. The Frenchman has the satisfaction, however, of rescuing Miriam from rape at the hands of one of her erstwhile allies. He has accomplished something after all. Anderson, meanwhile, has tried to have things both ways, playing on what fear then existed of jihad among American pulp readers while indulging in a perhaps more strongly felt fear of a sort of superwoman representing disorder on a global scale. Miriam's presence gives his story a redemptive thrill that the plot itself lacks and makes it worth a read today.

Posted by Samuel Wilson at 7:13 PM