Some writers of pulp prose have been elevated into the American literary canon, but that'll most likely never happen to the pulp poets. They were too old-fashioned, too dedicated to rhyme, meter and entertainment, and they could not be said to unveil hidden aspects of American life or the American psyche as the most acclaimed story writers are thought to have. It might still surprise people to find poetry in pulp, on the assumption that pulp readers might find any poetry to be some sort of mush. Yet you found it fairly regularly, in Adventure and other general fiction mags, in Weird Tales from the pens of Lovecraft, Howard and others, and quite often in western pulps, where poetry fit in with a tradition of balladry. One of the westerners, S. Omar Barker, was arguably the poet laureate of pulp, publishing prolifically (and in prose as well) from the 1920s into the 1970s, when he appeared frequently in the short-lived Far West. Barker was often, if not always, a comical poet, which probably put his work further into literary disrepute, but when he had the bit between his teeth he could at least entertain in fairly musical fashion. Here's a nice example of his work, handsomely presented in a two-page spread from a recently-scanned issue of Fifteen Western Tales from January 1949. It's actually pretty witty in its set-up for a triumph of peace-on-earth Christmas spirit and its punchline emphasis on simple carnal desire. If not fine art, Barker's stuff could count as folk art in future historians' eyes. 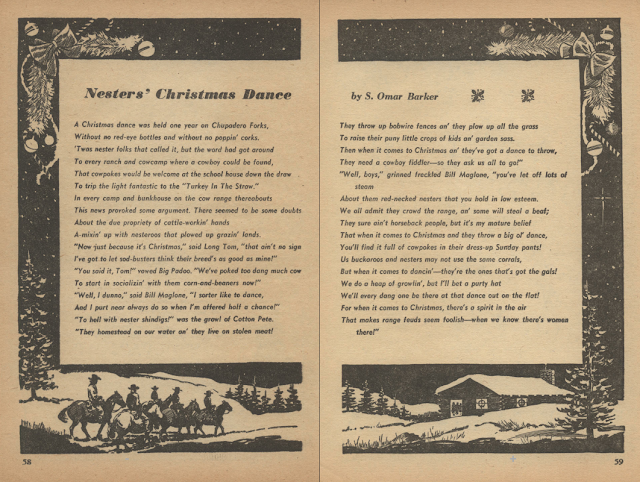 Posted by Samuel Wilson at 6:30 PM