'Boil my eyebrows!...Why, this is booze and not such bad booze at that.' 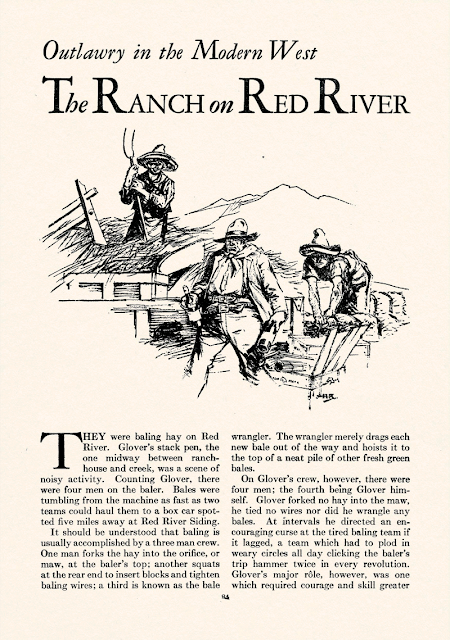 Whether it was good or bad, I would have given a shout-out to Allan Vaughan Elston's modern-day western "The Ranch on Red River" (Adventure, July 1, 1929) because its hero hails from my current home town of Albany, New York. It turned out to be fairly entertaining. Our Albanian hero, Tom Hargrove, decides to visit a borderland property he owns incognito, in order to learn the ranch trade from the ground floor from Adolph Glover, who runs the place on lease. Hargrove hasn't sent word to Glover, wanting to be treated without privilege as a common working man. It's a cliched situation but Elston has already complicated the situation by showing us that Glover is a bootlegger. He raises hay but sneaks a bottle of booze into each bale as it's being baled, a dangerous procedure that could cost an uncareful man a finger or an arm. Given his occupation, it's no surprise to readers that he isn't willing to take on a new, anonymous hand. The way he blows off Hargrove is a nice rebuke to all the stories where it's oh so easy for the hero to land a position without pulling rank. Hargrove's refusal to carry identification actually gets him into deep trouble after Glover discovers that he's discovered Glover's secret, albeit by accident. Glover's natural assumption is that Hargrove is a federal investigator sneaking around after evidence. He and his henchmen debate whether to "bump" the stranger, but all they really need to do is eliminate the evidence of their racket, since who'd take the word of a mere hobo?

Hargrove is no mere dilettante but a pulp hero, so he manages to escape his captivity, killing one of Glover's hands with a pitchfork in the process. He seeks out the local district attorney, not realizing, as we already do, that this mobbed-up official is in cahoots with Glover. The D.A. is obliged to call in Hargrove's Albany lawyer, but uses stall tactics to delay Hargrove's trial, during which the defendant intends to denounce Glover, until all the evidence is safely out of the way. He doesn't realize that Hargrove, before turning himself in, had secreted a damning bale of hay acquired during the confusion caused by just the sort of accident Elston prompted us to anticipate at the start of the story. Lawyerly chicanery could still raise reasonable doubt as to whether Glover was responsible for planting the bottle in the bale, but by gruesome good luck Hargrove has won the evidentiary lottery. The story closes as a court official cuts open the bale, revealing not only a bottle but Glover's guilty hand! -- "a thing of hairs and dead flesh ... an exhibit of compelling potence." I didn't think Elston, a writer who started relatively late (first publishing in pulp at age 38) but became quite prolific in the 1930s, had such strong stuff in him. Most of what I've read from him has been relatively bland, but there's a playfulness to this one, as well as a bit of nastiness, that makes it my favorite story of his so far.
Posted by Samuel Wilson at 6:38 PM