In this entire issue of Fiction House's jungle quarterly, for all of its explicit or implicit racism, you won't really find a black villain. I suppose some may say this is another way to deny agency to Africans in their own country, but the more I read jungle stories the more I'm convinced that their ultimate subject isn't the savagery of Africa or Africans but the dangerous possibilities open to white people in a place where their "civilized" rules don't appear to apply. You have white men plotting to rob native treasures or exploit native resources, white men becoming priests or pretending to be gods of unspeakable cults -- two of this issue's stories feature crocodile cults -- and so on and on. Invariably they are thwarted by more virtuous whites -- sometimes barely more so -- almost always accompanied by some virtuous black who has perhaps a 50-50 chance of surviving the story. The authors were a familiar repertory company; all of this issue's authors had published in Jungle Stories before and most would often do so again. However, this issue's "The Terrible Drums" was Paul Selonke's last-published pulp story. The idea here is that gangsters have infiltrated darkest Africa pretending to film a documentary about a tribe's rhythmic healing ritual, their real agenda being to steal a legendary ruby-encrusted blanket. The irony is that the rubies are fakes, the sort of stuff traders bestow on gullible natives, while the drum ritual, according to our white protagonist, has a genuine therapeutic effect -- if you're not driven mad by the drums, as the bad guys will be in a well-meaning native attempt to cure their madness. 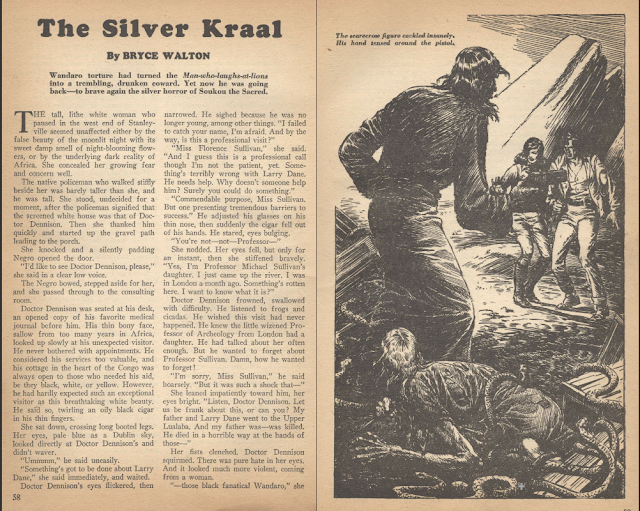 If there's anything unusual about Bryce Walton's "The Silver Kraal," it's that the story is told from a female viewpoint. If not quite a complete heroine, Florence Sullivan has the look of a Fiction House superwoman: a "tall, lithe white woman ... The native policeman who walked stiffly beside her was barely taller than she, and he was tall." Her main purpose is to inspire a broken-down white explorer to clean up, regain his sanity and avenger her father, the victim of one of those crocodile cults. It turns out, of course, that a wicked white man has usurped the otherwise-harmless cult for his own nefarious purposes. In Emmett McDowell's "Bwana Two-Sleep," another strong female goes to Africa to investigate whether her father's mine is played out and should be sold, and another strong man helps her thwart the Russian who hopes to take the rich lode for a song or, failing that, feed the heroine to the crocodiles. In Alexander Wallace's "Killer's Spoor" a white woman, daughter of another martyred explorer, has become "Matyenda," the mother-goddess-good luck charm of the Mpongwe tribe, but of course she must be rescued from this exalted state by the generic hero. 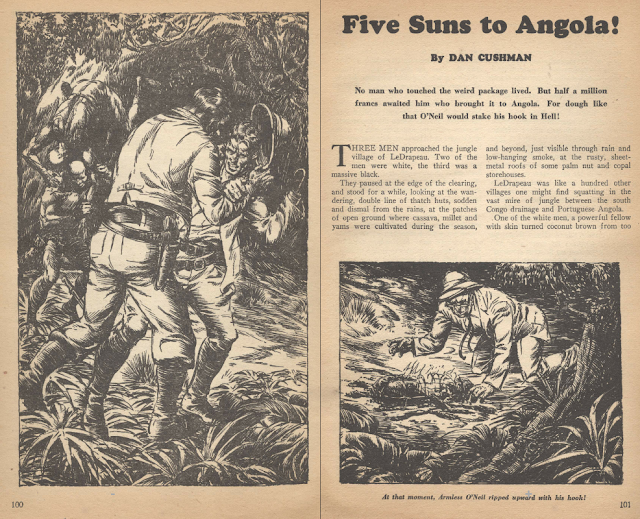 The least generic of this issue's heroes is Dan Cushman's recurring character, "Armless" O'Neil. Cushman is best known for his westerns, and pretty much boasted of writing African stories without any basis in expertise, but he's also easily the best writer in this particular issue and O'Neil's hard-boiled exuberance in "Five Suns to Angola!", in which the hook-handed hero goes reluctantly to great pains to transport a payload of potential medicinal value, overwhelms any objections to his portrayal of the dark continent, which is probably no less fact-based than anyone else's here. In any event Fiction House's jungle is as much a fantasy world as pulpdom's innumerable Chinatowns any other locales where readers could dream of getting away with the impossible or the impermissible by the standards of ordinary life.
Posted by Samuel Wilson at 5:47 PM