'I don't know who this man 'science' is, but he's a fool to take such chances.' 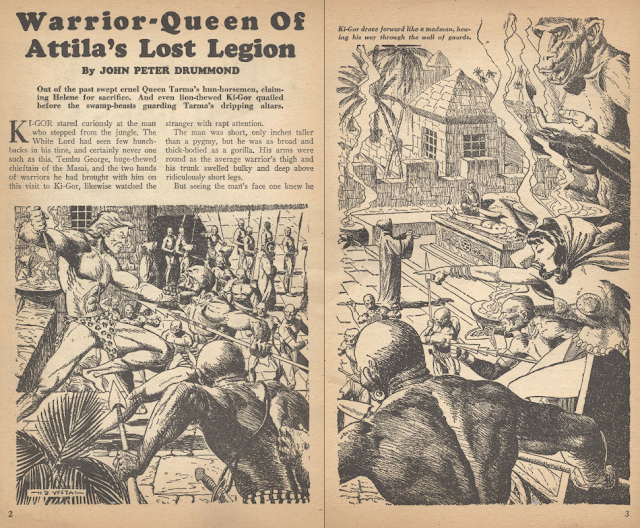 The adventures of Ki-Gor, White Lord of the Jungle, are some of the pulpiest stuff, in one sense of the word, of the 1940s. One of many imitation Tarzans, Ki-Gor was the star of Fiction House's quarterly Jungle Stories, published from 1938 to 1954. Authorship was credited to John Peter Drummond, a house name covering a number of authors. I don't know who actually authored "Warrior-Queen of Attila's Lost Legion" (Summer 1947), but the writer doesn't quite have the formula down. He makes a throwaway reference to the typical banter between Ki-Gor's two black sidekicks, the American boxer turned Masai chieftain Tembu George and pygmy chief N'Geeso -- themselves imitations of the two sidekicks of Gordon MacCreagh's Kingi Bwana -- but can't be bothered to actually write out their usual ball-busting. I can't say that I missed it, but I noticed it wasn't there. For that matter, there's no mention of George's American origins, and the first-time reader might assume that he's as much an African native as N'Geeso, though as a black man turned jungle lord of a sort he's one of the most potentially fascinating characters in pulpdom. Ki-Gor himself is a cookie-cutter clone, articulate like the literary Tarzan rather than primitive like the Tarzan of contemporary movies.  He's often upstaged on the magazine covers by his mate Helene, though that's less a reflection on Ki-Gor than standard Fiction House cover policy favoring cheesecake.

In any event, "Warrior Queen" pits the gang against yet another decadent lost civilization. Tarma, queen of the Maldeans, claims descent from "At-La," provoking speculation of Hunnish lineage, though I'm not sure that would be consistent with her lily-white status. She's the last pure-blood Maldean, the rest having interbred with natives, and she's looking for a white lord of the jungle to help her continue the royal line. The fact that Ki-Gor has a mate is immaterial, and the fact that Helene stabbed a particular ugly Maldean ape will only make it easier to put her out of the way. The gray ape, whom American explorer Williams wants to keep alive for the sake of science, is in fact an "earth god," a presumably sentient being with a language Tarma has mastered. Earth gods are, as you might expect, sacred, so both Helene and Williams, who dared capture one, are guilty of sacrilege and due to be sacrificed. The main action of the story is the capture of the two whites and the pursuit of the Maldeans -- just for the heck of it, their military commander is a hunchback -- by Ki-Gor and friends. I like pulp stories that pile wild new details on top of old ones, so we're well into the story by the time we find out that Tarma has control over dinosaurs thanks to a special reed whistle. The action takes us to the edge of spicy content, as Helene is subject to a whipping, though the villain gets only one stroke in before a berserk Ki-Gor intervenes. As I find to be typical of Jungle Stories, the narrative moves along quite nicely, the black characters are resourceful but deferential to the infallible white lord, and Ki-Gor himself is the least interesting element in the story. Luckily, his adventures are often fun in spite of him.
Posted by Samuel Wilson at 6:39 PM