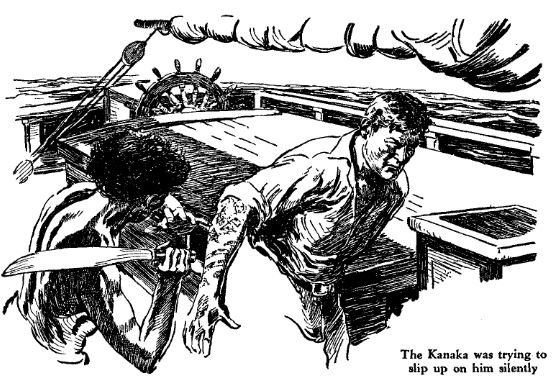 The tough American sailor working the South Seas is a pulp archetype. Gordon Young is credited with popularizing the type with his Hurricane Williams stories (and here's a Hurricane Williams novel) while the writer who made it his specialty more than any other, both in the pulps and the slicks, was probably Albert Richard Wetjen, whose Wallaby Jim, a Collier's hero, inspired a 1930s B movie. These South Sea stories are part seaborne westerns, part barbarian tales. They describe a largely lawless land where "savages," normally ruled by homegrown superstition, are easily lorded over by unscrupulous white exploiters, often with the aid of "witch doctors," while colonial overseers are far away. The heroes of these stories are the exceptional men, just as determined to make a living by trade, often as contemptuous toward natives as their villainous rivals, sometimes more alienated from their own cultures and "civilized" life, but always essentially moral and honorable. While villains seek to build little empires by oppressing natives and plundering resources, the heroic seamen often end up building empires of a kind by slaughtering these oppressors and plunderers, thus becoming recognized as laws unto themselves in the islands, men to whom victims and innocents can turn for aid and advice. These heroes of the South Seas flourished in a world with no recognizable geopolitical limits. their greatest antagonists being men much like themselves, or those men's savage allies. It wouldn't be the same for them to spend their time fighting Nazis or Japs, as some presumably did during World War II. A dream of independence, self-reliance and power redeemed by character would be lost. It may have been no accident, then, that Bellow Bill Williams passed from the scene in 1936, not long before the Axis powers to be began to hog all the villain action in pulps. While he sailed, Bellow Bill had some of the most colorful and violent adventures of any South Sea hero, and he probably was literally the most colorful of them all.

Now Bellow Bill Williams was six feet and three inches of bone and muscle. He weighed two hundred and forty pounds. If his voice was known through the South Seas, so was the amazing display of tattooing that covered every inch of his skin from hips to neck and shoulder to wrists. There was a full-rigged ship on his chest, a Chinese dragon on his back, bracelets of rope tattooed in pale blue ink around each wrist, and a snake coiled three times around his hips.

Ralph R. Perry made sure to put such a descriptive paragraph into all his Bellow Bill stories. For the record, Bill is also blond, though Perry describes his hair as curly, unlike the illustration above from "Terror Island" (1933). Perry also made a point of reminding readers that "Bellow Bill was a rotten shot, perfectly capable of missing a man with all six bullets at any range greater than fifteen feet," as in "The Atoll of Flaming Men" (1935). It's a nice touch that makes Bill something less than a superman, though Perry emphasizes that his hero likes to get to close quarters where his superior strength will tell. Perry is very good at putting Bill in physical distress in empathetic fashion. Bellow Bill is implacable but not imperturbable; you can tell when he's scared or flustered, or when he recognizes that he's misjudged a person or situation. There's a nice sequence in "Atoll" in which Bill has to talk himself into going into the hold of an abandoned lugger after already seeing that it's dragging a corpse by an air hose, knowing he can find nothing good. Bellow Bill is a pearler by vocation, but in the stories I've read you never see him ply his trade. Instead, he acts as a troubleshooter or negotiator for others based on his reputation for honorable dealing and formidable strength. His good nature and sense of loyalty get him into awful jams; his cunning, determination and brute strength usually get him out of them, though in "Terror Island" the main villains are taken out by a faithful dog whose mysterious death signals one last death trap for our hero.

Not much seems to be known about Ralph R. Perry. A birth year of 1895 appears to be certain, but the date of his death is unknown. He served in the Navy during World War I and wrote a number of non-fiction articles about his experiences, placing one in the prestigious Atlantic Monthly in 1920. According to the Fiction Mags Index he started appearing in pulps in 1924. In fact, he started at the top in Adventure. His first Argosy story doesn't appear until 1929, by which time he had published frequently in Adventure, Short Stories and several western and sea pulps. He published two more short stories and a two-part serial in the venerable weekly that year. When Bellow Bill first appeared I don't yet know. The first time the character is mentioned on a cover is in the August 1, 1931 issue, but the very fact that "Missing" is identified as "A Bellow Bill Novelette" indicates that Perry's hero was already a known quantity to Argosy readers. A number of novelettes from 1931 or 1930 are candidates for the first Bellow Bill story until a more complete Argosy collector sets me straight. It's possible, of course, that Bill was tried out in Adventure or Short Stories before settling in for his long run at Argosy, since authors usually could move characters from pulp to pulp at their pleasure.

If we don't know yet when Bellow Bill begins, we can at least build considerably on the Fiction Mags Index's very limited listing of Bellow Bill stories. In its index of series characters, the Index identifies only two Bellow Bill stories, ignoring the three stories that have long been identifiable and available in the unz.org trove. Moving forward from "Missing," I submit my preliminary and sometimes speculative list of Bellow Bill Williams stories in Argosy:

"More Than Millions," December 26, 1931 -- from this point, I'm going to work on the assumption that a "South Seas novelette" by Perry is a Bellow Bill tale.


After 1936 Perry concentrated on westerns, though his 1939 Argosy story "Shark's Treasure" comes close to the old flavor of South Seas mayhem. Ultimately, to make my case for Bellow Bill I have to show rather than tell, so later this week I'll upload my scan of "Fangs of the Fetish" and point you to the Bellow Bill stories in the unz.org trove, which has become trickier to negotiate recently than it used to be. You practically have to be a Bellow Bill of the computer to find your way around, but the pulp trove is worth the trip.

Posted by Samuel Wilson at 4:31 PM